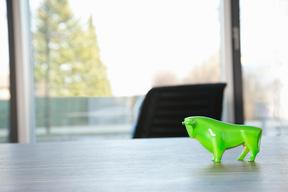 EnteroMedics Inc (NASDAQ:ETRM) has been weathering aggressive downside action over recent months. But yesterday was a very different story. The catalyst? Headlines suggesting that the European Patent Office has issued a Notice of Intention to Grant a European Patent covering safety features of the Company’s vBloc Neurometabolic Therapy System. The intention to grant the European patent follows the granting of a U.S. patent and represents the Company’s 70th patent in its IP portfolio.

The news was worth 40% in gains at the highs intraday. That’s the first strong push off the lows since mid-August, and may represent at least a reprieve from the spiral that has gripped this stock during its recent trend. Note, the stock has seen something like capitulatory volume of late, with transaction levels pushing 550% above the stock’s longer run average levels. Traders shouldn’t overlook this as important with the stock trading on a float that is relatively small at just 26.96M shares.

EnteroMedics Inc (NASDAQ:ETRM) trumpets itself as a medical device company that focuses on the design and development of devices that use neuroblocking technology to treat obesity, metabolic diseases, and other gastrointestinal disorders. Its proprietary neuroblocking technology is designed to intermittently block the vagus nerve using electrical impulses.

The company develops the Maestro Rechargeable System, which is used to limit the expansion of the stomach, control hunger sensations between meals, reduce the frequency and intensity of stomach contractions, and produce a feeling of early and prolonged fullness.

It has collaboration with Mayo Clinic for the development and testing of products for the treatment of obesity. The company was formerly known as Beta Medical, Inc. and changed its name to EnteroMedics Inc. in 2003. EnteroMedics Inc. was founded in 2002 and is headquartered in St. Paul, Minnesota.

Want to know when ETRM reaches critical levels? Subscribe to OracleDispatch.com Right Now by entering your Email in the box below

The sealing of patent rights in the EU within the Company’s IP portfolio extends their firm reach with their core technology and opens up much different mathematics in the pitch deck.

Neuromodulation is impossible without certain core safety measures, and it is those measures themselves that the Company has now patented in both the US and the EU.

The other recent catalyst of note is the Company’s September 13 announcement of clinical success at the Bariatric Center in Colorado, a vBloc Institute partner. Apparently, several vBloc procedures have been performed by Frank H. Chae, MD, who is the Chief Surgeon and Head of the Bariatric Center.

“The weight loss observed in my vBloc patients is trending greater than reported in the vBloc ReCharge Study,” said Dr. Chae. “Our patients have experienced more than 30 percent improvement in the percent total weight loss in the first three months when compared to the ReCharge Study patients. While our observations are not a clinical trial, the positive results of these practical applications should be recognized, particularly as vBloc moves towards obtaining broad reimbursement coverage.”

vBloc Therapy is approved for use in helping with weight loss in people aged 18 years and older who are obese, with a BMI of 40 to 45 kg/m 2 , or a BMI of 35 to 39.9 kg/m 2 with a related health condition such as Type 2 diabetes, high blood pressure, high cholesterol levels or obstructive sleep apnea.

“vBloc Therapy is a revolutionary treatment option for morbidly obese patients who do not wish to undergo anatomy-altering weight-loss procedures,” continued Dr. Chae. “I would expect vBloc to be the preferred choice of eligible patients when there is insurance coverage and they do not have to carry the full financial burden themselves.”

Currently trading at a market capitalization of $8.04M, ETRM had a decent balance sheet as of June 30, with cash ($11.52M) covering nearly 81% of its appreciable load of total debt on the books ($14.34M). However, we expect that has deteriorated dramatically, given over $11 mln hemorrhaging out the door after all operating expenses are accounted for. That suggests a worrisome trend. While the company also posted apparent top line growth of nearly 250%, that still got them nowhere near profitable. So, this is a leap of faith at present. The IP is building out, but the balance sheet is likely morphing into a ticking time bomb right now, and only a major acceleration in growth can turn this story around. Can it happen? Absolutely. Will it happen? Check back later to find out! To get the full story on ETRM subscribe below to Oracle Dispatch right now.