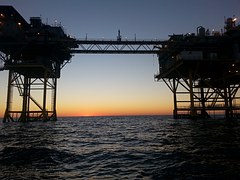 Paragon Offshore PLC (OTCMKTS:PGNPQ) is a global provider of offshore drilling rigs that was spun off of Noble Corp in August, 2014, the day after Crude Oil broke under $100/bbl for the last time. Paragon’s first six months as a full-fledged business entity saw oil move lower on over 80% of days, and give up nearly 50% as OPEC stopped even pretending to be in charge of the market. What a time to be born in the oil patch!

Of course, this company struggled to get a foothold into the teeth of the harshest bear market in the commodity space since the early 1980’s. And of course, the company was quickly swamped in debt and forced into Chapter 11. However, since the big $26/bbl low in WTI Crude in February, the stock, such as it is, has been seriously on the mend. That recovery has shown signs of accelerating lately, and even shrugging off bad news, so we thought it was a good time to really look under the hood.

Paragon Offshore PLC (OTCMKTS:PGNPQ) provides offshore drilling rigs. The company is involved in contracting its rigs, related equipment, and work crews to conduct oil and gas drilling and workover operations for its exploration and production customers on a day rate basis. Its drilling fleet consists of 34 jackups, 4 drillships and 2 semisubmersibles.

The company has operations in Mexico, Brazil, the North Sea, West Africa, the Middle East, India, and Southeast Asia. Paragon Offshore plc was incorporated in 2014 and is headquartered in Houston, Texas. As of February 14, 2016, Paragon Offshore plc, is in reorganization.

Find out when PGNPQ reaches critical levels. Subscribe to OracleDispatch.com now by entering your Email in the box below

On August 1, 2014, Noble made a pro rata distribution to its shareholders of all of PGNPQ’s issued and outstanding ordinary shares. To get a poetic sense of this Company, that was the day after Crude Oil broke under $100/bbl for the last time. Paragon’s first six months as a full-fledged business entity saw oil move lower on over 80% of days, and give up nearly 50% as OPEC stopped even pretending to be in charge of anything.

They hinge on dayrates and utilization for both floaters and jackups, and this is a challenging environment because no one is investing a whole lot in expansion. The context is survival. Paragon feeds off expansion activity in the oil space, generally.

“We anticipate that for the remainder of 2016, the industry will experience few tenders for new drilling activity and the available tenders will be highly competitive, potentially driving dayrates even lower. We also expect that offshore contract drillers will see continued negotiations on existing contracts to reduce dayrates and/or contract term and additional contract cancellations. However, we believe that reduced drilling activity is resulting in lower global oil supply. The combination of generally forecasted increasing global demand for hydrocarbons and natural decline, will eventually drive oil prices higher and provide stability, key indicators that will cause oil and gas companies to resume drilling activity. Despite current conditions, we continue to have confidence in the longer-term fundamentals for the industry.”

That’s not what you want to hear. But think about it another way: The company is saying things like that, and the stock isn’t selling off. In fact, that was from the 10-Q on August 9. The stock is up 20% since then. That type of “invincibility” is an important thing to note.

Earning a current market cap value of $64.7M, PGNPQ has a significant war chest ($889.09M) of cash on the books, with total assets just under $2.3B, which must be weighed relative to a mountain of debt (over $2.5B). But we knew that problem was there. The stock wouldn’t be in Chapter 11 otherwise. However, given that context, and given the less-than-promising action in Crude Oil, the stock is holding up rather impressively. Will that continue? To get the full story on PGNPQ subscribe below to Oracle Dispatch right now.