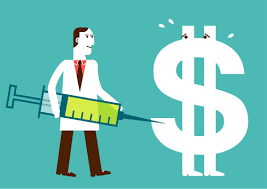 Matinas BioPharma Holdings Inc (OTCMKTS:MTNB) has been ripping higher boosted by reports that the FDA designated the Company’s lead drug candidate, MAT2203, as a Qualified Infectious Disease Product (QIDP) with Fast Track status. The Company also just closed on $8 mln in private placement financing at $5/share. Finally, MTNB has an established discovery program seeking products for treatment of non-alcoholic fatty acid liver disease, which is an exploding market space in the wake of VRX’s takeout of TBRA at an obscene 700% premium.

Recent action has seen a bit more than 150% tacked on to share pricing for the listing in the past month. Market participants may want to pay attention to this stock. MTNB has a track record that includes a number of dramatic bounces. In addition, the name has seen an influx in interest of late, with the stock’s recent average trading volume running just shy of 210% beyond its prior sustained average level

Matinas BioPharma Holdings Inc (OTCMKTS:MTNB) bills itself as a clinical-stage biopharmaceutical company that focuses on identifying and developing therapeutics for the treatment of fungal and bacterial infections using its lipid crystal drug delivery cochleate platform.

Its lead product candidate is MAT 2203, an oral formulation of the broad spectrum anti-fungal drug amphotericin B that has completed Phase Ia study for the treatment of fungal infections.

The company is also involved in developing MAT2501, an oral encochleated formulation of the IV-delivered aminoglycoside antibiotic used for treating hospital-acquired infections, including Gram-negative bacterial infections; MAT9001 for the treatment of triglycerides or severe hypertriglyceridemia, and dyslipidemia; and MAT8800 discovery program, which intends to identify product candidates derived from omega-3 fatty acids for the treatment of non-alcoholic fatty liver disease (NASH).

Matinas BioPharma Holdings, Inc. was founded in 2011 and is based in Bedminster, New Jersey.

Find out when MTNB reaches critical levels. Subscribe to OracleDispatch.com Right Now by entering your Email in the box below.

MTNB is a clinical-stage biopharmaceutical company focused on identifying and developing safe and effective broad spectrum therapeutics for the treatment of serious and life-threatening infections.

In addition, the Company is exploring development and partnership options for MAT9001, a prescription-only omega-3 fatty acid-based composition under development for hypertriglyceridemia, which has shown superiority versus Vascepa® (icosapent ethyl) in reducing serum triglycerides, Total- and Non-HDL-Cholesterol, apolipoproteins and PCSK9 levels.

Earning a current market cap value of $99.6M, MTNB has a decent store ($578.31k) of cash on the books, with total assets just under $5.6M, which compares with de minimus total accumulated debt. However to the extent the name has been associated with the “NASH” phenomenon in the wake of the VRX-TBRA deal, this stock may be falsely pricing in a revolution right now. There is nothing concrete in testing in that space for the company, but the ticker may have passed across desks as a peripheral sympathy play given the timing and extent of the recent rally. That said, MTNB has a number of strong catalysts in play as well, and an unspoiled balance sheet. This is one to keep on the radar. To get the full story on MTNB subscribe below to Oracle Dispatch right now.