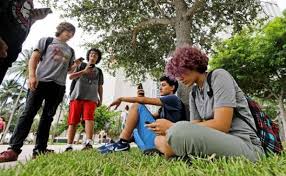 Nintendo Co., Ltd (ADR) (OTCMKTS: NTDOY) shares of entertainment company Nintendo Co., Ltd. (OTCMKTS: NTDOY), currently trading in the $32.63-$33.02 range, have experienced some significant price swings since July, giving traders hope that the company’s stock may be ready to start moving higher. Over a 52-week period, shares of NTDOY have traded between $15.34 and $38.25. The company currently has a market capitalization of nearly $38 billion.

The big catalyst, of course, was the release of Pokemon GO over the summer. The new mobile gaming app immediately became a worldwide phenomenon, and contributed to a bout of Pokemon-influenced buying in the stock market. According to some mobile gaming analysts, Pokemon GO was downloaded more than 500 million times.

Mid-July was just the start of speculative trading activity in shares of NTDOY. In early September, the launch of the new Apple iPhone 7 included the simultaneous and exclusive launch of Super Mario Run for Apple iPhone users.

Find out when $NTDOY reaches critical levels. Subscribe to OracleDispatch.com Right Now by entering your Email in the box below.

The new game promises to be one of the most popular games that Nintendo has ever made for mobile devices, and is already being touted as the next big mobile hit after the surprise success of Pokemon GO. As a result, shares of NTDOY spiked 28 percent in a single day after the announcement of Super Mario Run, briefly trading as high as $36.55 (almost as high as the Pokemon GO high of July).

Traders are now reconsidering their take on NTDOY stock, trying to decide if the stock is overvalued or undervalued. Nintendo, after all, is one of the world’s most recognizable entertainment brands and the maker of some of the world’s most popular portable and console game machines, such as the Wii, DS and 3DS.

In one camp are those traders who see Nintendo as the same stock that it’s been for the past decade. Back in 2007, shares of NTDOY traded as high as the mid-70’s. But as of September 1, shares of the company were down more than 65 percent from those 2007 highs – even with the incredible spike in share price due to Pokemon GO.

From this perspective, the release of Pokemon GO and Super Mario Run will do little to create new revenue streams, although they may result in an uptick in merchandise sales and renewed interest in older games featuring these characters. Of even more concern, daily users of Pokemon GO are down 35 percent and daily downloads are down 70 percent, with students back in school and unable to go outside to play Pokemon GO.

In the other camp, though, are traders who think that NTDOY may be regaining its old mojo, this time via mobile. After all, in March 2016, the company inked a new business alliance to develop and operate new gaming apps. And the company’s embrace of augmented reality for Pokemon GO was the type of forward-thinking innovation that traders once expected from Nintendo. From this perspective, NTDOY may be regaining its mojo from the days when it was the undisputed entertainment gaming champion. The emphasis has just shifted from hardware to software, in the form of gaming apps.

As a result, all eyes are now on the upcoming launch of Nintendo’s new flagship gaming system, the NX. The official launch of the Nintendo NX is scheduled for March 2017, meaning that shares of NTDOY are unlikely to see any kind of holiday bounce before the end of the year. However, the real stock price activity could take place in early 2017, as traders begin to anticipate the launch of the new gaming platform. For continuing coverage on NTDOY and our other hot stock picks, sign up for our free newsletter today and get our next hot stock pick!