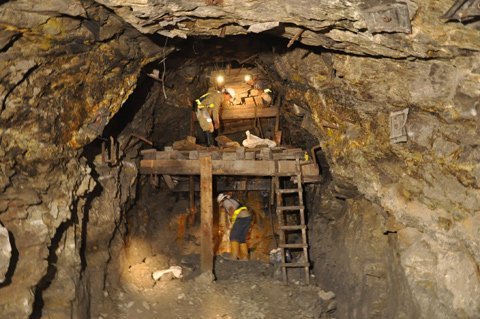 NEWMARKET GOLD INC COM NPV (OTCMKTS:NMKTF) had been advancing nicely on the strength of the company’s recent announcement of further positive results from its growth exploration programs targeting the Lower Phoenix gold system at Fosterville Gold Mine, State of Victoria, Australia. That announcement launched a flurry of buying and pushed the stock about 20% higher over a couple days.

Then we got word of a definitive agreement to merge with Kirkland Lake Gold Inc. (TSX:KLG) to form “an exciting new mid-tier gold company”, and things started to deteriorate. Causality is hard to define because Tuesday’s monster drop of -9.73% came on a sector-wide mauling as bullion and miners were positively decapitated on a technical breakdown in the gold market.

NEWMARKET GOLD INC COM NPV (OTCMKTS:NMKTF) frames itself as a company that operates as a gold mining and exploration company in Australia. As they put it, “The Company is focused on creating substantial shareholder value by maintaining strong foundation of quality gold production, over 200,000 ounces annually, generating free cash flow and maintaining a large resource base as it executes a clearly defined gold asset consolidation strategy.”

Find out when $NMKTF reaches critical levels. Subscribe to OracleDispatch.com Right Now by entering your Email in the box below.

Mr. Douglas Forster, President and Chief Executive Officer, Newmarket Gold commented following the recent mining results, and his overview is extremely insightful in terms of understanding the value of the company’s key assets in their Fosterville property.

“We are very pleased to report continued positive results from our surface-based growth drilling and underground delineation drilling programs on the Lower Phoenix gold system at our flagship Fosterville Gold Mine. We continue to invest in Fosterville with a total of 72,498m of growth and definition drilling completed to date in 2016 utilizing 9 drill rigs. This drilling continues to advance our knowledge of the resource potential of the high-grade visible gold-bearing Lower Phoenix structures with new mineralized zones still being discovered, including a west dipping lode in the Lower Phoenix Footwall which intersected 194 g/t Au over 14.3 m (ETW 3.07 m).

“Surface-based drilling programs also continue to confirm the resource expansion potential of the Lower Phoenix gold system with an intercept of 13.36 g/t Au over 3.85 m (ETW 3.8 m) located approximately 500 meters down-plunge from Lower Phoenix Mineral Reserves. Currently, four underground drill rigs are operating on resource definition programs on the Phoenix and Lower Phoenix gold systems and continue to intersect high-grade visible gold mineralization outside of known Measured and Indicated Mineral Resources. Exploration success since the start of the year on the Eagle and East Dipping faults support our view to expand the Phoenix and Lower Phoenix near mine Measured and Indicated Mineral Resource of 673,000 ounces grading 8.33 g/t Au (as of December 31, 2015) through continued targeting of the down plunge extension of these high-grade structures.”

However, the market did not seem to like the deal between Kirkland and Newmarket, despite the fact that it was spun well and seems like a decent fit by our eye: the firms together will operate seven mines and five mills in areas that are considered strong geologically and low-risk geopolitically in Canada and Australia, which are universally considered to be the best regions in the world.

Of course, the stock’s retreat from its lofty levels does come after a major 6 month tear that includes almost 200% in total upside in 2016. And the pullback was clearly owing to weakness in the mining space. Gold moved -3.5% lower on Tuesday and the mining ETF was -10% lower, booking its worst trading day of the year.

At this time, carrying a capital value in the market of $564.6M, NMKTF has a significant war chest ($69.87M) of cash on the books, in a pool of total assets approaching $230M, which is balanced by a very manageable load ($2.79M) of total accumulated debt. With growth picking up in emerging markets and developed markets, and the central bank rhetoric turning towards pulling back and normalizing, the gold market is going through a realignment. When we start to see some fiscal stimulus and actual inflation in the readings, this will be tapping new highs, but it looks like we might have to weather a bit of a break here first. Find out when $NMKTF reaches critical levels. Subscribe to OracleDispatch.com Right Now by entering your Email in the box below.