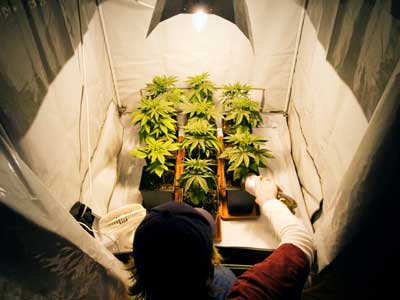 Surna Inc (OTCMKTS:SRNA) and its shareholders are riding the marijuana momentum wave even higher. SRNA is yet another company that’s riding the momentum around marijuana stocks. Colorado-based Surna Inc (OTCMKTS:SRNA) develops, designs and distributes cultivation technologies for the cannabis industry. Shares began to rally at the end of September, when they broke through the resistance point of $0.10, and have doubled in value since September 28 – from $0.097 to $0.194.

Surna Inc (OTCMKTS:SRNA) has several catalysts that are driving the stock higher, but the one that investors are focused on right now are the November ballot initiatives. On Nov. 8, nine different states – Arizona, Arkansas, California, Florida, Maine, Massachusetts, Montana, Nevada and North Dakota will vote on marijuana legalization. The big one, of course, is California. If Proposition 64 passes, it would immediately triple the size of the legalized marijuana industry overnight. Currently, this proposition has the support of top Californian politicians and 60% of Californians appear ready to vote in favor of legalization.

Find out when $SRNA stock reaches critical levels. Subscribe to OracleDispatch.com Right Now by entering your Email in the box below.

That would be huge for Surna, which is directly leveraged to the build-out of the legalized marijuana industry. Surna provides the indoor climate control systems – chillers, lights, reflectors and irrigation systems – that are used for cultivating cannabis. The company is an expert on controlled environment agriculture (CEA) and has leveraged its expertise on growing organic herbs and vegetables for cannabis cultivation. The company’s core products include Surna Chillers, Surna Reflectors, and a number of building and air quality systems.

Obviously, a lot of the excitement over SRNA is tied to the bigger hype around “Green Rush 2.0.” And back in 2014, SRNA was also part of the massive momentum around these stocks, with its stock price exploding from $0.175 to $8.73. This time around, SRNA is in even better shape financially.

Moreover, the company is really building out its sales model. In August, company management also laid out a vision for how SRNA planned to grow sales. They already have innovative and energy-efficient products, but now the focus is on having a more aggressive sales presence. The company plans to use regional sales representatives with state expertise. In states like Nevada or California, that could be an important way to really boost revenue and profitability for the company.

SRNA has blazed through resistance levels, and the stock may have room to run in the near-term. Surna is already bumping up against 52-week highs. But even at these higher levels, SRNA still appears to be an undervalued, and is actually flying under-the-radar of most traders. Shareholders believe SRNA has a plan in place to become an integral part of the cannabis industry’s future growth. We will continue to monitor this one closely and will update with any changes. For more information on Surna, Inc. (OTCMKTS:SRNA) and other fast-growth penny stocks, subscribe to OracleDispatch.com now.