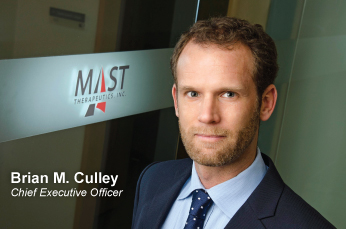 Mast Therapeutics Inc (NYSEMKT:MSTX) has been under heavy distribution lately following disappointing results from its trial of its sickle cell disease drug vepoloxamer. Following the news, the stock crashed almost 84% in the after-hours trading in late September. MSTX shares have not recovered in any meaningful way since.

The vepoloxamer program has been cast aside and the company is focused on new avenues for future development. That said, MSTX has a history of dramatic rallies and market participants may want to keep a close eye on it going forward. The worst is currently priced in and assumed. The narrative is now vulnerable to a potential squeeze-inducing reframing should new perspective emerge from management.

Mast Therapeutics Inc (NYSEMKT:MSTX) bills itself as a clinical-stage biopharmaceutical company that develops therapies for serious or life-threatening diseases with significant unmet needs.

Mast Therapeutics, Inc. is a publicly traded biopharmaceutical company headquartered in San Diego, California. The Company had two clinical-stage investigational new drugs, AIR001 and vepoloxamer. AIR001, a sodium nitrite solution for intermittent inhalation via nebulizer, is in Phase 2 clinical development for the treatment of heart failure with preserved ejection fraction.

Find out when $MSTX reaches critical levels. Subscribe to OracleDispatch.com Right Now by entering your Email in the box below.

After the crash, the company stated, “We are exceedingly disappointed with these top-line results… These analyses are limited to just top-line data, so in the coming weeks, the Company intends to review the full data set from EPIC. In addition, we plan to perform an interim analysis of the ongoing heart failure trial of vepoloxamer.”

“However, based on the data we’ve seen to date, we expect we will terminate all clinical development of vepoloxamer. Consequently, while we evaluate our options, we intend to significantly and immediately reduce our operating expenses and continue our efforts with AIR001, our lead asset in heart failure with preserved ejection fraction, which currently is the subject of a 100-patient phase 2 study expected to complete enrollment by the end of 2017,” the biopharma added.

“This is a company that’s probably, I would say, worthless, that’s gonna drop 90 percent or more in the next few weeks,” said Shkreli. “This happens in biotech,” he continued. “There’s at least 10-20 of these a year where you just have a drug that never should have been developed, by a management team that doesn’t know what they’re doing. The company doesn’t have any cash, and they’re just praying to hit the lotto and unfortunately they won’t. That’s kind of what I think is going to happen to Mast.”

At this point, all hopes are now centered on AIR001.

On that note, Mast Therapeutics, Inc. just announced that its wholly-owned subsidiary, Aires Pharmaceuticals, Inc., has entered into a collaborative agreement with Philips Respironics, Inc., the sleep and respiratory care business of Royal Philips, related to the supply of Philips’ I-neb Adaptive Aersol Delivery devices and related consumables for the nebulized delivery of the Company’s lead product candidate, AIR001, a sodium nitrite solution for intermittent inhalation.

“As we announced last month, we are accelerating activities related to our AIR001 program with support for ongoing, investigator-sponsored Phase 2 clinical studies of AIR001 being conducted at three separate prestigious research institutions,” said Brian M. Culley, Chief Executive Officer of Mast. “As part of this commitment, we are pleased to be working with Philips, a recognized global leader in the development of aerosol delivery devices and a leading provider of innovative solutions for the global respiratory market. Our agreement has been extended to include not only two of the Phase 2 studies of AIR001 currently underway, but also future clinical studies and will remain in place until 2020 or sooner, if replaced with a commercial supply agreement.”

At this time, carrying a capital value in the market of $17M, MSTX had a significant war chest ($24M) of cash on the books as of June 30, with total assets just under $48M, which stands against a mountain ($14.99M) of total accumulated debt that has likely mounted further given recent obstacles. While all signs look ugly here, one must remember that markets are about the common knowledge game. Assumptions set the price, and the opportunity is in their unraveling. The assumption now is that Mast is worthless. Any shift in that story will result in an “Epic” rally. For continuing coverage on $MSTX stock and other hot stock picks, sign up for our free newsletter today and get our next hot stock pick!