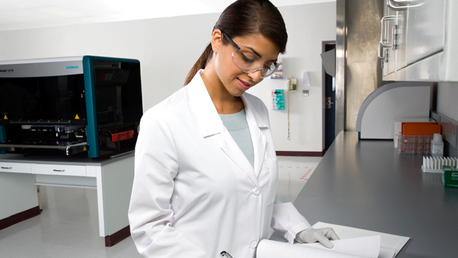 GREAT BASIN SCIENT COM USD0.0001 (POST SPLIT) (OTCMKTS:GBSN) has been pressing to the downside as the company’s cap table digests a wave of dilutive debt conversion and inflates its common outstanding share pool by a huge degree. Traders and investors are also acclimating to the idea that GBSN will be making a long-term stay of it on the OTC and off the Nasdaq. However, the impact of getting past bad news like this is often a short covering bounce, which may now have a chance to blossom.

In all, we’ve witnessed a heart-stopping decline, with shares of the company falling 98% in just the past month. However, GBSN has a track record that includes a number of dramatic bounces. Moreover, the company has benefitted from a jump in recent trading volume to the tune of just shy of 850% beyond its prior sustained average level during this capitulatory phase and the freely traded float may still “act” small despite recent expansion in the overall common.

Its assays under development include Staphyloccocus aureus (SA) pre-surgical nasal screen, a rapid test for the presence of SA in the nasal passages of a pre-surgical patient; Stool bacterial pathogenic panel, which is designed to detect the causes of food poisoning; Candida blood infections panel that is designed to identify the five species of Candida directly from positive blood cultures; Pertussis test for contagious respiratory disease caused by the bacterium Bordetella pertussis; and CT/NG test for chlamydia tracomatis/neisseria gonorrhoeae.

Find out when $GBSN reaches critical levels. Subscribe to OracleDispatch.com Right Now by entering your Email in the box below.

According to the company’s press messaging, “Great Basin Scientific is a molecular diagnostics company that commercializes breakthrough chip-based technologies. The Company is dedicated to the development of simple, yet powerful, sample-to-result technology and products that provide fast, multiple-pathogen diagnoses of infectious diseases. The Company’s vision is to make molecular diagnostic testing so simple and cost-effective that every patient will be tested for every serious infection, reducing misdiagnoses and significantly limiting the spread of infectious disease.”

As of October 21, 2016, a total principal amount of $12,979,510 of the 2015 Notes has been permanently converted into shares of common stock and a principal amount of $4,358,052 has been converted that is subject to deferrals. $4,762,438 principal remains to be converted, subject to deferrals. A total of $14.8 million of the proceeds from the 2015 Notes has been released to the Company including $4.6 million at closing and $10.2 million from the restricted cash accounts. $3.6 million remains in the restricted accounts to be released to the Company on November 1, 2016, per the terms of the exchange agreement dated October 2, 2016.

As previously announced, a Nasdaq Hearings Panel had granted the Company an extension of time to demonstrate compliance with the $35 million market value of listed securities requirement for continued listing on The Nasdaq Capital Market, as set forth in Nasdaq Listing Rule 5550 , through October 10, 2016. The Company was not able to demonstrate compliance by that date. As a result, Nasdaq advised the Company that trading in its common stock would be suspended. In view of this potentiality, the Company had previously filed an application with OTC Markets Group to have the Company’s common stock quoted for trading on the OTCQB marketplace, which was subsequently approved.

Currently trading at a market capitalization of roughly $3M, GBSN has a decent store ($1.16M) of cash on the books, in a pool of total assets greater than $26M, which is balanced by a mountain ($16.10M) of total accumulated debt. Given the adjustments recently established through conversion of outstanding notes, and the current price of GBSN shares, we would need to see about 1000% rally in the stock to have a shot at re-listing on the Nasdaq. However, now that this information is out and common knowledge, we may well see some short covering take hold to start next week. For continuing coverage on $GBSN stock and our other hot penny stock picks, sign up for our free newsletter now and get our next hot stock pick!