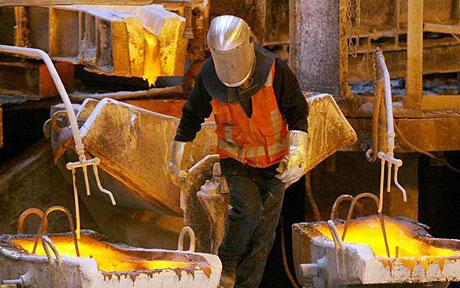 Marsh & McLennan Companies Inc. (MMC) shares are trading at lower $111.09 and the avg recommendation for the stock is Moderate Buy, while the...
Read more
Investing

British American Tobacco p.l.c. (BTI) shares are trading at higher $33.69 and the avg recommendation for the stock is Strong Buy, while the current...
Read more
Investing

Sociedad Quimica y Minera de Chile S.A. (SQM) shares are trading at lower $36.43 and the avg recommendation for the stock is Hold, while...
Read more
Investing

Ampio Pharmaceuticals Inc. (AMPE) shares are trading at lower $0.78 and the avg recommendation for the stock is Moderate Buy. To add more color...
Read more

Turquoise Hill Resources Ltd (NYSE:TRQ) is a play in the metals space that’s clearly begun to spur some interest among traders as shares bounce up off recent lows over the past two weeks. This can be broadly and easily lumped into the “global reflation” trade in response to the surprise specter of a Trump administration coming into view in the US. However, one must note that the move higher in copper got started well ahead of election night. And this is a copper producer.

The fact that the stock is not diving (along with gold and silver prices) tells you just exactly where the market thinks this company’s bread is buttered. As noted in very recent company materials, and to confirm that idea, “A copper concentrator plant, with related facilities and necessary infrastructure to support a nominal throughput of 100,000 tons of ore per day, was constructed to process ore mined from the Oyut open pit.”

Turquoise Hill Resources Ltd (NYSE:TRQ) bills itself as a company that operates as a metals miner. The company engages in mining copper, gold, and silver.

Its principal material mineral resource property is its 66% interest in the Oyu Tolgoi copper-gold-silver mine located in the southern Mongolia.

The company was formerly known as Ivanhoe Mines Ltd. and changed its name to Turquoise Hill Resources Ltd. in August 2012. The company was founded in 1994 and is headquartered in Vancouver, Canada.

Find out when $TRQ stock reaches critical levels. Subscribe to OracleDispatch.com Right Now by entering your Email in the box below.

According to materials, “The Oyu Tolgoi mine is approximately 550 kilometers south of Ulaanbaatar, Mongolia’s capital city, and 80 kilometers north of the Mongolia-China border. Mineralization on the property consists of porphyry-style copper, gold, silver, and molybdenum contained in a linear structural trend (the Oyu Tolgoi Trend) that has a strike length extending over 26 kilometers. Mineral resources have been identified in a series of deposits throughout this trend. They include, from south to north, the Heruga Deposit, the Oyut deposit, and the Hugo Dummett deposits (Hugo South, Hugo North, and Hugo North Extension).”

This has been by far the company’s biggest capital investment. At the end of Q3’16, for example, Oyu Tolgoi had spent $105.8 million on underground expansion capital and had commitments of more than $750 million.

Long-term development plans for Oyu Tolgoi, according to information from a recent company release, are based on a 95,000-tonne-per-day underground block-cave mine.

“In August 2013, development of the underground mine was suspended pending resolution of matters with the Government of Mongolia. Following signing of the Oyu Tolgoi Underground Mine Development and Financing Plan (Underground Plan) in May 2015 and the signing of a $4.4 billion project finance facility in December 2015, Oyu Tolgoi received the formal notice to proceed approval by the boards of Turquoise Hill, Rio Tinto and Oyu Tolgoi LLC on May 5, 2016.”

The company is currently seeing a decline in gold production due to site-specific issues. That is less damaging given the recent shellacking that has been seen in the gold market. However, as noted in the recent company financial results documentation, that is having an impact on financials: “Revenue of $226.3 million in Q3’16 decreased 31.4% over Q2’16 primarily reflecting reduced gold sales as a result of lower gold production.”

The chart shows 16% during the past month in terms of shareholder gains in the stock. Market participants may want to pay attention to this stock. TRQ has a track record that includes a number of dramatic bounces. What’s more, the company has seen an influx of interest lately, with the stock’s recent average trading volume running approaching 150% beyond its prior sustained average level.

At this time, carrying a capital value in the market of $7B, TRQ has a significant war chest ($1.44B) of cash on the books, which leans against an appreciable load ($4.11B) of total accumulated debt. While recent financial results could look much better, the recent shift in the price of copper looks to be driving the action for this stock. The market is often smarter than the sum of its parts, and there may be “information” present here that is difficult to see on a due diligence run through the numbers and headlines. We will continue to check into the story and post another update soon. For continuing coverage on shares of $TRQ stock, as well as our other hot stock picks, sign up for our free newsletter today and get our next hot stock pick!

Lockheed Martin Corporation (LMT) shares are trading at lower $368.55 and the avg recommendation for the stock is Moderate Buy, while the current analyst...
Read more
Opinion

Sangamo Therapeutics Inc. (SGMO) shares are trading at higher $11.19 and the avg recommendation for the stock is Moderate Buy. To add more color...
Read more
Investing

Aon Plc (AON) shares are trading at lower $202.17 and the avg recommendation for the stock is Moderate Buy, while the current analyst price...
Read more
Wall Street Daily

Triumph Group Inc. (NYSE:TGI) on the Path to Ruin

Triumph Group Inc. (TGI) shares are trading at lower $7.15 and the avg recommendation for the stock is Hold, while the current analyst price...
Read more
Sector News

Is Now the Time to Invest in MGM Growth Properties LLC (NYSE:MGP)?

MGM Growth Properties LLC (MGP) shares are trading at lower $27.26 and the avg recommendation for the stock is Strong Buy, while the current...
Read more
ORACLEDISPATCH