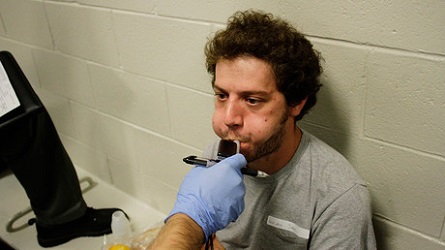 CANNABIX TECHNOLOG COM NPV (OTCMKTS:BLOZF) has been powering in an uptrend as traders digest the impact of the company’s recent press release of images of its “Cannabix Marijuana Breathalyzer Beta 2.0 device”, showing components housed in a durable compact black box which has been reduced in size to be a portable device.

The announcement demonstrates the progress underway toward the market for the company’s principal product. The stock has been tearing up the chart as a result, with over 70% gains piled on for shareholders of the stock during just the past week. Furthermore, the listing has seen interest climb, with an increase in trading volume exceeding 250% above its longer-run average levels.

CANNABIX TECHNOLOG COM NPV (OTCMKTS:BLOZF) trumpets itself as a company that develops Cannabix Marijuana Breathalyzer for law enforcement and the workplace in North America. The company’s Cannabix Marijuana Breathalyzer system is based on breath testing technology for recent use of the Tetrahydrocannabinol component of marijuana. It provides breath testing devices to enhance detection of marijuana-impaired driving offenses on roads.

The company’s media messaging sums it up thus: “Cannabix Technologies Inc. is a leader in marijuana breathalyzer development for law enforcement and the workplace. Cannabix has established breath testing technologies in the pursuit of bringing durable, portable hand-held tools to market to enhance detection of marijuana-impaired driving offenses on roads at a time when marijuana is becoming legal in many global jurisdictions. Cannabix is working to develop drug-testing devices that will detect THC – the psychoactive component of marijuana that causes intoxication – using breath samples. In particular, Cannabix is focused on developing breath testing devices for detection of recent use of THC, in contrast to urine testing for THC metabolite that requires an invasive collection and reflects use days or even weeks earlier. The devices will also be useful for other practical applications such as testing employees in the workplace where intoxication by THC can be hazardous.”

Find out when $BLOZF stock reaches critical levels. Subscribe to OracleDispatch.com Right Now by entering your Email in the box below.

As noted above, the company just recently released images of its Beta 2.0 Cannabix Marijuana Breathalyzer and provided a progress update. According to recent coverage, “The new prototype includes a robust detection system and components platform that will be used in an eventual finalized product. The prototype has provided excellent sensitivity in lab testing and will be utilized to conduct scientific studies with live marijuana users to test for accuracy and sensitivity.”

According to a recent release, “Cannabix has been using a methodical iterative product development process to develop its marijuana breathalyzer. Using this method, the product is developed in several prototype stages with each stage used to advance the product to subsequent stages. Cannabix has systematically moved the development of the Cannabix Marijuana Breathalyzer from a concept stage to its Beta 2.0 prototype.” This transparent process of iterative development has likely been a factor in the stock’s excellent performance.

The end market for sales of this device is clearly in the midst of a massive expansion, given recent steps to expand the legal ‘territory’ of pot in North America. Not only have we just seen 8 more states in the US with increasing legal acceptance of marijuana as of the November 8 vote, but we are also seeing a very fast ramp toward legality across the entirety of Canada.

According to recent Forbes article, “Canada has an established national medical marijuana program within Health Canada that is well respected by many other countries and looked up to as a model to follow. The program is still making adjustments and improvements as it matures and determines what is and isn’t working. Now the country is tasked with figuring out how to legalize recreational marijuana. A task force was established and has been given the job to figure out how to deliver Prime Minister Trudeau’s legalization promise. The expectation is that recreational marijuana will happen sometime in 2017.”

At this time, carrying a capital value in the market of $57.1M, BLOZF has a decent store ($1.86M) of cash on the books, along with total assets topping $17M, which stands against very little total accumulated debt. That represents an exceptional balance sheet situation.

In addition, the transparent process of product development employed by the company ensures that even this phase of operational existence promises a gradual roll-out of catalysts for traders along with a comparative tracking of expansion in the theoretical end sales target marketplace. We will be tracking both of those threads of information, and update this story again as events warrant. For continuing coverage on shares of $BLOZF stock, as well as our other hot stock picks, sign up for our free newsletter today and get our next hot stock pick!