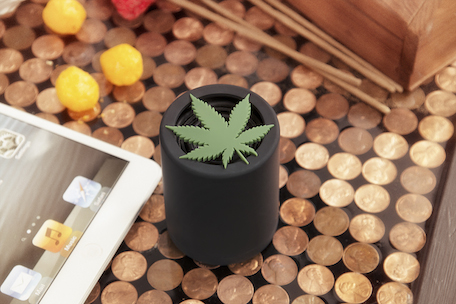 MassRoots Inc (OTCMKTS:MSRT) is a micro-cap marijuana stock that has started to engage some focus among traders and investors as shares bounce around in the aftermath of the landmark voting statement made a bit more than a week ago. It also has helped that the company announced significant revenue growth in the November 14 10-Q, as well as product and strain reviews within its iOS and Android applications earlier in the month. “Through community-driven reviews, MassRoots aims to connect consumers with the best products to treat their ailments.”

The vote, itself, was another clear sign that Americans generally seem to move toward legalization when asked officially. And MSRT is a company predicated on growing from that premise over time.

The company also operates MassRoots.com/shop, an e-commerce platform that allows visitors to order MassRoots Inc T-shirts, jars, and stickers; and MassRoots for Business, a free online portal for dispensaries to schedule posts, view analytics, and gain insights into followers. MassRoots, Inc. was founded in 2013 and is headquartered in Denver, Colorado.

As the reader likely knows, on November 8, nine states voted on the legal status of marijuana. Eight of them voted in favor of greater legality, with four states moving to fully legalize weed on a recreational basis. According to Cowen & Co., the fact that California was among them will likely push the overall legal sales footprint of pot in America to over $20 billion.

Naturally, this is about more than just the US. In Canada, the story may be even more compelling. Legislation is likely to be on the table sometime next year to fully legalize pot on a national basis for all conceivable consumers, according to a promise made by the country’s PM Trudeau.

However, we are already seeing significant improvement in financials. MassRoots Inc is making real money, with trailing revs already coming in at $796.51k over the past 12 months. In addition, the company is starting to see major topline growth, with quarterly y/y revs increasing at a revolutionary 23053%. If we start to consider this type of momentum as prefatory to the expanding pie phenomenon inherent in the legal shifts we are seeing, then the story gets even more interesting.

That said, one has to be somewhat cognizant of recent changes in politics in the US that are also related to something that happened on November 8. This week closed with the announcement of Jeff Sessions as Attorney General of the United States of America. There may not be a more outspoken enemy of marijuana in the US than Mr. Sessions. The new administration is already floating the concept of a federal law prohibiting and superseding state legalizations of pot.

We don’t see that as likely given the extreme steps necessary to enact such a law. But, suffice it to say, the top of the pyramid is not an open doorway in the same direction we have seen of late in this legal procession of increasing acceptance. It may be a hiccup or it may be more. It’s tough to say. Let’s call it “an undefined headwind.”

Currently trading at a market capitalization of $40.3M, MSRT has very little cash on the books, in a pool of total assets just shy of $440K, which is balanced by an appreciable load ($1.20M) of total accumulated debt.

However, sales growth is redefining the importance of the issues on the balance sheet, and likely new growth ahead inspires confidence in that trend. We see this as a very interesting story and will continue to track it closely. For continuing coverage on shares of $MSRT stock, as well as our other hot stock picks, sign up for our free newsletter today and get our next hot stock pick!