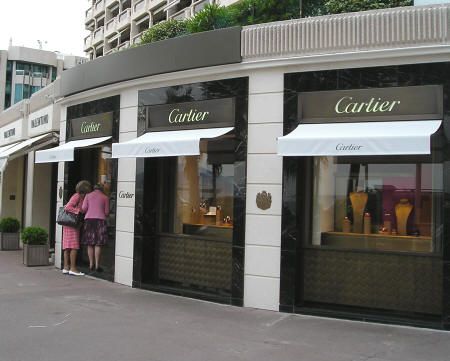 RICHEMONT(CIE FIN) SPON ADR EACH REPR 0.1 ORD (OTCMKTS:CFRUY) is a Swiss dispenser of luxury that counts Cartier, Piaget, Lancel, and Montblanc among its many brands. Basically, if you’ve seen something uber-fancy and bejeweled and totally superfluous to a functional existence featured in a full-page ad in an over-glossy, over-sized magazine, it’s probably produced by Richemont.

But, in an age of slowing trends in Asia and terrorism and uncertainty in Europe, times have been notably tough for the company of late. According to a recent Barron’s article, “The problems afflicting Richemont are occurring across the sector. Few luxury businesses have been spared by slowing economic growth in Asia, where much of their clientele is based, or an anticorruption crackdown in China that targeted gift-giving. Struggling economies across Europe have also taken a toll, and a recent spate of terror attacks has deterred many tourists, particularly in the key French luxury market.”

RICHEMONT(CIE FIN) SPON ADR EACH REPR 0.1 ORD (OTCMKTS:CFRUY) promulgates itself as a company that engages in the luxury goods business in Europe, the Middle East and Africa, Asia, and the Americas.

It operates through Jewellery Maisons, Specialist Watchmakers, and Other segments. The company designs, manufactures, and distributes jewelry products; and precision timepieces, watches, writing instruments, and accessories.

Compagnie Financière Richemont SA was founded in 1988 and is headquartered in Bellevue, Switzerland.

Find out when CFRUY stock reaches critical levels. Subscribe to OracleDispatch.com Right Now by entering your Email in the box below.

As noted above, trends for the stock’s sector have been a major headwind. But this is a blue-chip name in the space and will likely see bids when out of favor. However, there are a few key issues that could arise over coming months — a sort of a ‘garden of black swans’ — none of which being overly likely, but each a major risk for Richemont.

The most obvious and top of mind is the emergence of the National Front party in France. Marine Le Pen is now a serious contender for the French elections in April and May of next year. She has already made extremely clear that her first action as new President of France would be to exit the Euro single currency pact and likely the EU.

If “Frexit” happens, then the EU is definitely done. It will collapse probably the next day. While this may well end up being better over the long run for the EU economy, the first consequence would like be a shock recession and some pretty chaotic times.

That leads to the second risk: a sudden powerful strengthening of the Swiss Franc. We have already seen Richemont highly susceptible to this factor. A strong Franc creates a pricing inefficiency for the company, given that they produce locally, with expenses in Francs, and sell internationally, with sales largely in Euros, Renminbi, Yen, and Dollars.

Such a domestic currency strengthening may happen as the ECB acts aggressively to buffer against anxieties leading into the French elections. And it would certainly happen in response to a Le Pen victory.

However, as is always the case, since these are very obvious macro risks, they are already major factors in the price of any stock like this one that depends on affluence and free dispensation of disposable incomes among the conspicuous consumers of the region. Hence, if the most likely path of reality plays out – no Le Pen victory and no major upward volatility in the Franc – then one must assume this very high quality, out-of-favor asset may have quite a bit of blue sky above.

Earning a current market cap value of $3.6B, CFRUY has a significant war chest ($8.21B) of cash on the books, alongside total assets approaching $3.6M, which compares with an appreciable load ($3.25B) of total accumulated debt. This is a solid balance sheet underlying a strong stable of brands.

Provided this company is not assaulted by an improbably bad near term macro environment, there will likely be plenty of interest on the bid. In addition, we are starting to see action in bond markets that appears to highlight an expectation for increasing inflation. This company is a hard luxury producer (ie, watches, jewelry, etc), not a soft luxury producer (ie, fashion, etc). That’s a better place to be in during an inflection toward inflation. We will keep an eye on this name and update things again as events dictate. For continuing coverage on shares of $CFRUY stock, as well as our other hot stock picks, sign up for our free newsletter today and get our next hot stock pick!