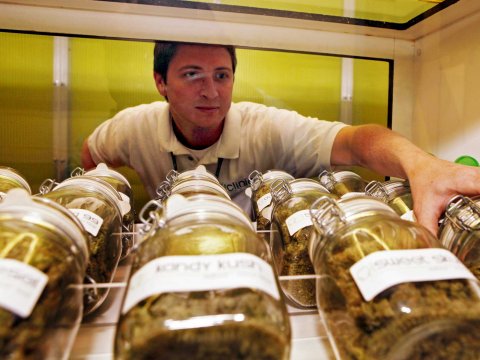 Cannabis Sativa Inc (OTCMKTS:CBDS) is a stock we took an almost wildly bullish position on as an anticipatory runner into the November 8 vote. Our argument was simple: the company was denied a 3-2 stock split back in August, thus pinning the float at an almost absurdly tight 4 million shares just as the biggest marijuana vote in history was coming and all sorts of new money would be trying to find exposure. In addition, the same day would be a presidential election with this company’s former executive as a candidate.

That adds up to an extreme mechanical recipe for a squeeze. There simply did not appear to us to be enough supply to accommodate even a small increase of trading activity. And this stock has seen a massive jump in activity. But one should note, it’s going to take a very different argument to make a case for this stock in the aftermath of the vote.

Find out when $CBDS stock reaches critical levels. Subscribe to OracleDispatch.com Right Now by entering your Email in the box below.

Overall, our sense is that there are some exciting possibilities for this company even if it might not be our top priority just at this moment in terms of finding that one killer play for near-term growth on the basis of the recent expansion in the legal footprint of the cannabis patch.

As the reader is no doubt aware, Nov. 8 saw California’s Proposition 64 passed, making California the largest state to legalize marijuana for recreational use.

According to a recent release, “the 62-page law, formally known as the Control, Regulate and Tax Adult Use Act, or the Adult Use of Marijuana Act, allows up to one ounce of marijuana flower or eight grams of cannabis concentrates for adults 21 and older, the personal cultivation of up to six marijuana plants and the industrial cultivation of hemp. The recreational use California marijuana market is estimated to reach $35 billion by 2020 based on Colorado economic growth predictions.”

In addition, voters in Massachusetts and Nevada have passed recreational use of marijuana in their respective states, while Florida, North Dakota, and Arkansas approved medical marijuana initiatives. The combined estimated legal marijuana markets for these states is in excess of $2 billion, with the total market surpassing $7 billion this year and over $40 billion by 2020. Additionally, the Company applauds any other successful marijuana legalization reform efforts.

We’ve witnessed a -20% decline in the stock over the past month. That said, CBDS has evidenced sudden upward volatility on many prior occasions. What’s more, the stock has seen an influx in interest of late, with the stock’s recent average trading volume running 75% over the long run average. It pays to take note of this fact with the stock trading on a float that is extremely small at just 4.24M shares, as we noted earlier. It’s something the veterans know to key on: a mechanically driven price squeeze can result from this type of mix of small float and ramping attention from traders.

Now commanding a market cap of $83.1M, Cannabis Sativa Inc has a decent store ($152.14k) of cash on the books, with total assets of nearly $4M, which is balanced by an appreciable load ($336.12k) of total accumulated debt.

This probably isn’t the perfect play right now in the space, but it may well develop into one of the best plays as the industry picture develops a bit further. The balance sheet isn’t in bad shape. But we need to see some further strategy development here before we get excited. That said, we will certainly keep a close eye on it and let you know if the stars align from here. For continuing coverage on shares of $CBDS stock, as well as our other hot stock picks, sign up for our free newsletter today and get our next hot stock pick!