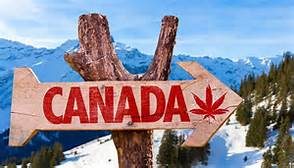 CANOPY GROWTH CORP COM NPV (OTCMKTS:TWMJF) has continued to be one of the true leaders in the North American cannabis patch, advancing nicely off its post-election sell-the-news correction swing low. We pegged this one as a leader early on, and we still like the story, particularly because the Canadian marijuana plays are still running toward major catalysts given their inner radical position relative to PM Trudeau’s promise to steer Canadian law toward a full recreational legalization of pot sometime in 2017.

According to Bloomberg, Canada’s push to legalize marijuana could be a “game changer” for the recreational pot industry with the potential to reach C$6 billion ($4.5 billion) in sales by 2021. As far as recent action goes, we’ve witnessed 62% added to share values of the name over the past month of action. Market participants may want to pay attention to this stock. TWMJF is a stock whose past is littered with sudden rips. Moreover, the name has seen an influx in interest of late, with the stock’s recent average trading volume running topping 380% over what the stock has registered over the longer term.

Canopy Growth just announced on Thursday that it will acquire all of the issued and outstanding shares of Mettrum Health Corp., creating a world-leading diversified cannabis company with six licensed facilities, and a licensed production footprint of approximately 665,000 sq. ft., with significant acreage for expansion.

Currently trading at a market capitalization of $992.5M, TWMJF has a significant war chest ($33.60M) of cash on the books, which is balanced by an appreciable load ($5.51M) of total accumulated debt.

TWMJF is making real money, with trailing revs already coming in at $17.78M. In addition, the company is starting to see major topline growth, with quarterly y/y revs increasing at 245%. So, the balance sheet is in great shape, the financials are soaring along, and the legal catalysts are out in front. The only drawback is how much speculative capital may already be hanging out in this stock. But it should have a tough time finding negative catalysts. We will update the story again soon. For continuing coverage on shares of $TWMJF stock, as well as our other hot stock picks, sign up for our free newsletter today and get our next hot stock pick!