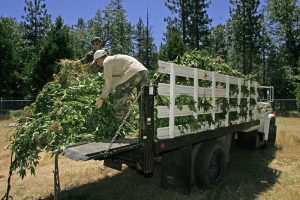 Medical Marijuana Inc (OTCMKTS:MJNA) is a stock that’s been advancing nicely helped along by its recent announcement that its major investment company AXIM Biotechnologies, Inc. has received approval from the Medical Ethical Committee of Wageningen University in The Netherlands to begin a study on patients suffering from irritable bowel syndrome (IBS) with AXIM’s product CanChew Plus – a CBD-containing chewing gum.

We’ve witnessed 5% tacked on to share pricing for the name in the past week, a rally that has pushed up against longer standing distributive pressure in the stock. This is emblematic of the stock. MJNA is a stock whose past is littered with sudden rips. In addition, the stock has benefitted from a jump in recent trading volume to the tune of 140% above its longer-run average levels.

Medical Marijuana Inc (OTCMKTS:MJNA) trumpets itself as an investment holding company that operates in the medical marijuana and industrial hemp markets. Its products range from patented and proprietary based cannabinoid products to seed and stalk or isolated high-value extracts manufactured and formulated for the pharmaceutical, nutraceutical, and cosmeceutical industries.

The company licenses its proprietary testing, genetics, labeling and packaging, tracking, production, and standardization methods for the medicinal cannabinoid industry. It engages in the research and development of cannabinoid-based pharmaceuticals; and marketing and distribution of cannabidiol hemp oil-based products.

In addition, MJNA provides management support and services to cooperatives, collectives, health and wellness facilities, and medical clinics; and consulting and securities services to businesses and individuals in the legal cannabis industry. Further, it focuses on the treatment of pain and other medical disorders with the application of chewing gum-based cannabis/cannabinoid medical products.

Find out when $MJNA stock reaches critical levels. Subscribe to OracleDispatch.com Right Now by entering your Email in the box below.

MJNA has a large investment interest in AXIM Biotechnologies, Inc. That company has begun to look like a real success. However, we would note that there has been a very interesting divergence appearing of late. According to the data we could find, MJNA owns more than 35% of AXIM. And AXIM has increased in value by over 7-fold in the past month. The two companies have similar overall market caps.

In any case, Dr. Stuart Titus, CEO of Medical Marijuana Inc noted in the recent release: “With the global treatment market for irritable bowel syndrome estimated to grow in value to $1.5 billion by 2023, cannabis-based products like CanChew Plus® can provide viable solutions for patients suffering from some of the most common of functional gastrointestinal disorders.”

“It is the goal of our family of companies and for AXIM to help people suffering from various gastrointestinal disorders with no effective remedies such as IBD and Crohn’s disease. Positive outcomes from these type of studies can help in the immediate need to enter trials for inflammatory bowel disease (IBD) and Crohn’s disease.”

METC at Wageningen University is an institutional approval board that is compliant with the Ethical Principles for Medical Research adopted at the 18th World Medical Association (WMA) General Assembly in Helsinki, Finland, in June 1964.

Wageningen University is a world-class education and research institute in the field of life sciences, agricultural and environmental science, and the only university in The Netherlands to focus on the theme of “healthy food and living environment.”

The company just posted financials highlighted by trailing twelve-month revenues now at $9.22M. However, the company failed to post top line growth in its most recent quarter. Investors will be looking for that growth to kick back in next time around, especially with increasing competition no doubt moving into the space. We will update this story again soon as new data hits the market. For continuing coverage on shares of $MJNA stock, as well as our other hot stock picks, sign up for our free newsletter today and get our next hot stock pick!