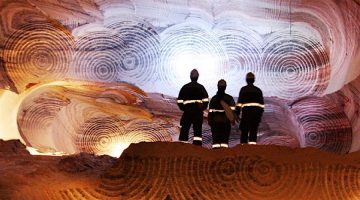 Intrepid Potash, Inc. (NYSE:IPI) is a micro-cap and one of the hottest performing stocks of the past six months. IPI is in a sector you might not expect: the production and marketing of potash (potassium chloride).

Shares of Intrepid Potash, Inc. (NYSE:IPI) – the largest producer of potash in the United States – are up 81.82 percent over the six-month period from June 28 to December 28.

Intrepid Potash, Inc. (NYSE:IPI) shares are currently trading at $2.01, giving the company a market cap of $123.24m. Over the most recent 52-week period, shares of the company have traded as low as $0.65 and as high as $3.31. Institutional ownership of the stock is 37 percent.

Find out when $IPI stock reaches critical levels. Subscribe to OracleDispatch.com Right Now by entering your Email in the box below.

The company’s two primary products are potash, which is used as a nutrient for agricultural crops, animal feed and some industrial processes, and a specialty fertilizer that it markets as Trio. This fertilizer contains a “trio” of important nutrients: potassium, magnesium and sulfate. The company also produces salt, magnesium chloride and metal recovery salts from its potash-mining processes.

In terms of overall size, the company is responsible for 9 percent of the nation’s consumption of potash (potassium chloride) and is the only producer in the Western world solely dedicated to potassium-related products. The company has five active potash production facilities – 3 in New Mexico and 2 in Utah.

Intrepid Potash appears to be moving away from the conventional potash production process, which involves underground mines in Carlsbad, New Mexico. Instead, the company is moving into above ground solar solution facilities. In fact, Intrepid Potash is a leader in solar evaporation production, one of the lowest cost, environmentally friendly production methods for potash.

By transferring more potash production into these lower cost solar evaporation facilities, it’s possible that the company could continue to lower its operational costs and improve its overall balance sheet. That would help the company regain its footing until pricing in the potash market firms up. The company also appears to be focusing on how certain by products of its potassium extraction and production can be re-used and re-combined in new ways.

Going forward, analysts will keep an eye on the company’s move into solar evaporation production, which could be a way to boost the company’s performance in the short term. In a best-case scenario, of course, analysts would like to see the company continue to narrow its losses and eventually move into the black.

While the past six months have been tremendous for Intrepid Potash, shares of the company are still down 11.86 percent for the year (as of December 28). Over the long term, a bigger question might be whether the company needs to diversify further into other potassium-related products.

The Trio fertilizer product hints as what’s possible for Intrepid Potash. The company, after all, is a market leader in the extraction, production and sale of potassium. By showing analysts and investors that it’s more than just a single-product company, Intrepid Potash might just be able to regain its footing, perhaps even back to its 52-week high of $3.31. For more news on Intrepid Potash, Inc. and other fast-moving penny stocks, please subscribe to OracleDispatch.com now.