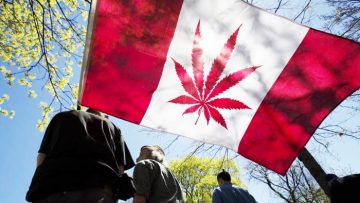 ORGANIGRAM HLDGS I COM NPV (OTCMKTS:OGRMF) is one of the leading micro-cap players in the Canadian medical marijuana space. Shares have consistently seen rising average volume over the past couple of months, with the past month seeing a 29% jump in transactions over the longer-term average. The stock has been consolidating its gains of late, after launching for better than 1200% over a year leading into October. Recent action has been informed by a couple key announcements.

First off, the company just let the market know that it is voluntarily recalling certain lots of medical marijuana which were supplied between August and December 2016 due to the detection of amounts of an unapproved pesticide not registered for use on marijuana under the Pest Control Products Act. Secondly, the company announced that it has retained CFN Media Group to conduct a 60-day investor and market visibility program beginning on December 20, 2016, subject to TSX Venture Exchange approval. Compensation for the program is reported to be less than $8,000 per month.

According to company materials, “From the day we started back in 2013, it’s been about making lives better – for our clients, our people, and our community. We’re based in Moncton, New Brunswick, the heart of the Maritimes, but at OrganiGram we’re committed to improving the quality of life for Canadians across the country. For us, this means working with health-care providers and industry organizations, supporting research and education, and providing a safe, effective product. To be effective in that last goal, we made a decision to produce organic cannabis. Growing certified organic medical cannabis isn’t easy, in fact, most licensed producers won’t take this on. It means more care, more testing, more rules… but in the end, it means a product that we feel delivers on our goals in the best way. And improving the quality of life for Canadians is not just about getting safe, quality product to them effectively. It’s about creating jobs, being good neighbors and contributing to our community.”

Find out when $OGRMF stock reaches critical levels. Subscribe to OracleDispatch.com Right Now by entering your Email in the box below.

As noted above, the company has recently retained CFN to help get the word out about this company. Sometimes, that’s a move that smacks of weakness. However, in this case, we are talking about a company with massive upcoming catalysts and trailing revs topping $6 million on nearly 200% y/y growth.

According to the release, “CFN Media will leverage its extensive reach and presence with both mainstream and cannabis-focused investors across North America to elevate OrganiGram’s financial brand and attract high-quality long-term investors.”

That PR partnership comes just in front of the voluntary recall. As the company points out, this has been deemed a Type III recall, which is defined as “a situation in which the use of, or exposure to, dried marijuana, fresh marijuana or cannabis oil, marijuana plants or seeds is not likely to cause any adverse health consequences.”

The source of the substance is unknown as Organigram is a certified organic grower and does not use compounds of this nature in its production processes. The Company is cooperating with Health Canada officials to determine how the substance came into contact with the marijuana.

Organigram’s client service department is directly notifying all clients affected by the recall. Any further action, if necessary, will be undertaken at the direction of Health Canada.

Currently the number of lots affected is small, however, additional screening could result in additional lots being determined to be compromised. In the event that the number of contaminated lots significantly increases, the Company’s operating revenue could be negatively affected.

At this time, carrying a capital value in the market of $146.5M, OGRMF has a significant war chest ($266.17k) of cash on the books, which must be weighed relative to about $331K in total current liabilities. OGRMF is pulling in trailing 12-month revenues of $6.1M. In addition, the company is seeing major top line growth, with y/y quarterly revenues growing at 176.2%. This may be a very interesting story and we will look forward to updating it again soon. For continuing coverage on shares of $OGRMF stock, as well as our other hot stock picks, sign up for our free newsletter today and get our next hot stock pick!