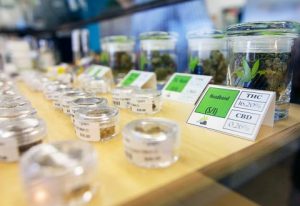 KAYA HLDGS INC COM USD0.001 (OTCMKTS:KAYS) is an explosive play in the cannabis patch that has been bottled into an increasingly tight sideways range for the past couple weeks near the midpoint of its wild December range of movement – a range that spans the ladder from a dime/share to nearly six times that level. The company recently announced that it has been awarded its first full recreational marijuana retailer license from the Oregon Liquor Control Commission for its existing South Salem Kaya Shack Marijuana Superstore. The Company also announced that KAYS has secured a $2.1 million funding commitment to implement the Company’s 2017 growth plan.

“We appreciate the hard work of the dedicated folks at The Oregon Liquor Control Commission, which is responsible for regulating and licensing adult use marijuana enterprises in Oregon. We realize they have been creating an infrastructure from scratch that seeks to meet and satisfy diverse and sometimes competing sets of interests. We understand and respect the steps the OLCC has taken to ensure the legality and integrity of the emerging legal cannabis sector in Oregon,” commented Craig Frank, KAYS CEO.

KAYA HLDGS INC COM USD0.001 (OTCMKTS:KAYS) trumpets itself as a company that through its subsidiary, Marijuana Holdings Americas, Inc., owns and operates legal marijuana dispensaries in the United States.

It offers various medical marijuana products, including Kaya Kush marijuana; various other concentrates, such as butane hash oil and CO2 oil extract; high grade oils and tinctures; two high CBD low THC strains; various marijuana-infused tinctures; and Kaya Candies, Kaya Caramels, and an assortment of cookies and cakes for patients who do not smoke. The company operates its dispensaries at Portland and South Salem, Oregon.

According to company materials, “KAYS (KAYS) through its subsidiaries, owns and operates Kaya Shack™ (www.kayashack.com), the first legal marijuana dispensary owned and operated by a U.S. publicly traded company.  KAYS creates and establishes its own brands that produce, distribute and/or sell premium cannabis products under proprietary brands, including flower, concentrates, and cannabis-infused baked goods and candies. The Company also operates its own Grow facility.”

Find out when $KAYS stock reaches critical levels. Subscribe to OracleDispatch.com Right Now by entering your Email in the box below.

As noted above, KAYS is an integrated play with a broad market position, and just got its first full recreational marijuana retailer license from the Oregon Liquor Control Commission for its existing Salem-area “superstore”. In addition, and playing to our “Investment Capital is Everything” theme for the 2017 MJ stock battlefield, the $2.1M in committed funding capital is probably the more important point.

As one can imagine, management wasn’t stingy with its excitement.

“We are pleased we have received our first license to sell legal adult use marijuana in our existing South Salem Kaya Shack Marijuana Superstore, and now that our public company ownership structure has been approved, we expect to confirm the issuance of licenses for the two new Kaya Shack™ Marijuana Superstores we are developing in Salem as soon as construction is complete and they are inspected,” Mr. Frank continued.  “Additionally, we hope to have resolution of our Portland, Oregon city licensing issue within the very near future so that we may resolve the location of our marijuana production and processing facility as well as convert our existing Medical Marijuana Dispensary in Portland to full OLCC recreational status.”

“We are equally thrilled that we have secured a $2.1 million financing commitment from our existing institutional funding sources that we believe will enable us to execute on our 2017 growth plan. The funds are targeted to expand the capacity of our manufacturing and grow facility, open new stores and introduce Kaya owned brands. We are grateful for the opportunity this funding provides us.”

The chart shows 36% during the past month in terms of shareholder gains in the listing. Moreover, the company has witnessed a pop in interest, as transaction volume levels have recently pushed just shy of 400% over the long run average. Since we last covered the name, the stock has moved 35.4% higher.

Earning a current market cap value of $28.7M, KAYS has virtually no cash on the books, which stands against about $748K in total current liabilities. One should also note that debt has been growing over recent quarters. KAYS is pulling in trailing 12-month revenues of $987K. In addition, the company is seeing major top line growth, with y/y quarterly revenues growing at 704%. We will update the story again soon as developments transpire. For continuing coverage on shares of $KAYS stock, as well as our other hot stock picks, sign up for our free newsletter today and get our next hot stock pick!