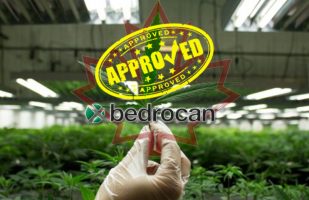 CANOPY GROWTH CORP COM NPV (OTCMKTS:TWMJF) is a Canadian small cap marijuana producer that we have covered several times. The stock is easy to like: the company has a fortress balance sheet, with a 40:1 ratio of cash to debt, and is seeing accelerating growth in revenues of nearly 250% on a quarterly year/year basis. TWMJF stock is consolidating in a lateral range of late, and may be offering traders and investors an opportunity, especially since the Canadian cannabis patch still has some catalysts to look forward to in 2017.

Traders will note 10% added to share values of TWMJF stock over the past month of action. This may be only the quiet before the next storm. Canopy Growth has evidenced sudden upward volatility on many prior occasions. What’s more, the listing has started to see increasing volume again of late (to the tune of 22% over what the stock has registered over the longer term).

Find out when TWMJF stock reaches critical levels. Subscribe to OracleDispatch.com Right Now by entering your Email in the box below.

As noted above, Canadian cannabis companies should be at a premium in 2017, as Canadian politics suggests that the country is on its way toward full national legalization for marijuana on all levels sometime this year. The basis for this is the prime minister’s own words, pledged last year. Mr. Trudeau made that promise, and analysts expect it will happen. That puts the Canadian space in a better spot when it comes to gauging future catalysts.

For funds and investors recently alerted to the potential value to be found in the rapidly growing cannabis space, it’s much more enticing to know you are buying into a story that has upcoming catalysts in place. That will be the case for the US players before too long. But 2017 may be a bit of a dry season in that respect. That said, for those based north of the border in the land of maple and frost, 2017 should be their time to shine.

At this time, carrying a capital value in the market of $793.7M, TWMJF has a significant war chest ($45.6M) of cash on the books, which must be weighed relative to about $1.1M in total current liabilities. One should also note that debt has been growing over recent quarters. TWMJF is pulling in trailing 12-month revenues of $24M. In addition, the company is seeing major top line growth, with y/y quarterly revenues growing at 244.6%. This is an exciting story, and we look forward to a follow-up chapter as events transpire. For continuing coverage on shares of TWMJF stock, as well as our other hot stock picks, sign up for our free newsletter today and get our next hot stock pick!