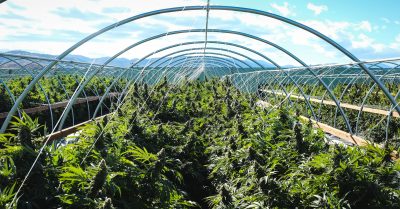 mCig Inc (OTCMKTS:MCIG) has been a company in transition in the recent past, moving from a focus exclusively in the manufacture, marketing, and distribution of electronic cigarettes, vaporizers, and accessories under the mCig brand name into an entity that is attempting to be a far more diversified play in the cannabis patch. The stock has been in a steep corrective mode in recent weeks but still remains about 700% above its levels of just 6 months ago.

The most recent catalysts out of the company offer a good bit of perspective. First, earlier this month, the company filed its audited 3rd Quarter financial reports with the SEC, noting strong sequential and annual growth in revenues, profits, cash, and assets. It’s hard to argue with the numbers, but once again, they follow enormous share price gains because management was touting these financial results back in December through overt guidance. Second, just recently, the company announced that its subsidiary, Grow Contractors, was selected to build the first indoor grow facility in Oregon for Forest Grove Cultivation.

mCig Inc (OTCMKTS:MCIG) offers electronic cigarettes and related products through its online store mcig.org, as well as through the company’s wholesale, distributor, and retail programs. It also constructs commercial and modular buildings which are aimed at the cannabis cultivation market.

According to company materials, “Headquartered in Henderson, Nevada, mCig Inc. A diversified company servicing the legal cannabis, hemp and CBD markets via its lifestyle brands. MCIG has transitioned from a vaporizer manufacturer to industry leading large-scale, full-service cannabis cultivation construction company with its Scalable Solutions division currently operating in the rapidly expanding Nevada market. The company looks forward to growing its core competencies to service the Ancillary legal Cannabis, Hemp and CBD markets, with broader expansion to take place once federal laws change.”

The company’s subsidiary, Grow Contractors, touts itself through the following messaging: “Using modular system technology, we create a variety of environmental enclosures ranging from basic temperature and humidity control to medical grade cleanroom environments designed to produce consistent results during any stage of cannabis cultivation. Our mission is to help our clients safeguard investments and find long-term success. This is why we take pride in our ISO compliant, state of the art building components to be the base of your business.”

Sales increased massively, as did profits. Costs narrowed. And the balance sheet soaked in plenty of protection for a rainy day. In addition, the company had its best quarter ever, and clearly diversified its strategic model in an effective manner. That last point is most easily elucidated by pointing to the Grow Contractors segment.

That brings us back to the Forest Grove contract.

The contract, itself, is quite straightforward: 115,000 square feet, and meant to be a top ranked grow space in Oregon. The first phase is already permitted for 50,000 square feet. The company plans to get started in July and wrap up in November if all goes as scheduled. According to the release, the sales associated with the job should close at somewhere between $1.5M and $2M, depending on add-ons selected as the job progresses. That would, itself, represent the company’s best sales quarter ever.

Since its most recent data showed massive growth not dependent on the Grow Contractors segment, one expects the sequential quarterly growth to pick up during fiscal 2017, which is certainly an enticing concept for bulls.

Earning a current market cap value of $87.1M, MCIG has a store ($420K) of cash on the books, which is balanced by virtually no total current liabilities. As noted above, MCIG is pulling in trailing 12-month revenues of $2.5M. In addition, the company is seeing major top line growth, with y/y quarterly revenues growing at 445.9%. The road ahead for MCIG will be interesting and we plan to continue our close watch as it evolves. For continuing coverage on shares of $MCIG stock, as well as our other hot stock picks, sign up for our free newsletter today and get our next hot stock pick!