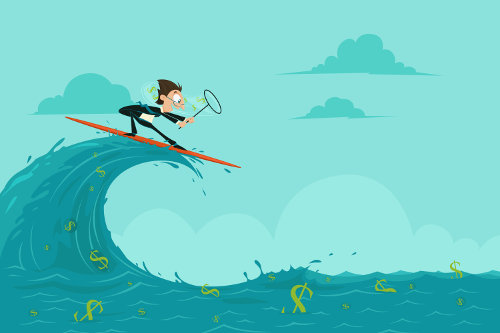 Vitality Biopharma Inc (OTCMKTS:VBIO) is a micro cap stock that has caught the eye of many traders this week. My sources tell me there was dramatic pain caused to those who shorted this stock. Let’s look back to August 2016 where shares were trading .60 cents averaging around 30,000 shares on an average day. The sector move began for many stocks around September, and Vitality was swept up in the wave of “anything that has to do with Cannabis”, was about to go higher.

The problem was many longtime short sellers in MicroCaps had not lived through a “fat tail” of statistical probability when stocks do things they had not ever done before. This happened across the board in around 500 stocks related to Cannabis. The problem was these short sellers started to average up (which they had done before), but this time the wave was too strong and the .60 cent level in stocks like VBIO would never be seen again.

Let’s look at what happens when you do not react quickly enough and get out of the way of an oncoming train.

Vitality Biopharma Inc (OTCMKTS:VBIO) shares went from the .60 cent level to $1.55 and stayed at this level through the election and into year end, and didn’t look like they were going to get the parabolic rise many other in the Cannabis Sector were getting. This gave the short sellers a false (in hindsight) sense of security, and they had an opportunity to cover before year end and get out of the way, but that isn’t what happened.  The shares traded back down to .90 cents on December 6th and in 3 short weeks they would top out at $4.09 just as we were wrapping up the year.

Find out when $VBIO stock reaches critical levels. Subscribe to OracleDispatch.com Right Now by entering your Email in the box below.

As a portfolio manager who carried any of these short positions through the 3 week gauntlet they were forced to cover them into the year end, and like all panic short covering they cover at the exact top which they did. Those shares today are trading $1.88 and those greedy, slow moving managers got their foot in the trap and are still hurting.  The painful part of it for them was the fact that they ate into their own bonus pool and likely had a lean Christmas.

VBIO itself is dedicated to the development of cannabinoid prodrug pharmaceuticals and is committed to unlocking the power of cannabinoids for the treatment of serious neurological and inflammatory disorders, they recently announced that they had positive results indicating a new use for the Company’s proprietary prodrug cannabinoid delivery platform.

Multiple colon cancer cell types were screened, each with unique combinations of genetic mutations that drive cancerous growth, and including a cell line known to express drug-resistance genes such as PD-L1. The Company found that cannabidiol (CBD) universally inhibited cell growth at concentrations similar to established chemotherapeutics. Vitality also found that its cannabidiol prodrug was not toxic to the human cells at the concentrations tested, demonstrating the relative safety of its prodrug delivery system.

“Our studies show that CBD inhibits colon cancer cell line growth at concentrations that are similar to those used by conventional chemotherapeutics, and at levels that we expect can be delivered using our prodrug delivery technology,” said Dr. Brandon Zipp, Director of R&D for Vitality. Robert Brooke, CEO of Vitality, adds that, “This finding means our proprietary cannabosides could be quite useful for treatment or prevention of colorectal cancer, even with hard-to-treat cancers, and without the systemic toxicity of DNA-damaging chemotherapies.”

It is often good to look back at the fundamentals of what a company does, but in reality the historical price action over a year or two year period always tells the story.  In this case the story is about how shares changed hands back in Q4 2016 and how many short sellers got “foot hooked”, and will never trade this stock again – unless of course they choose to trade from the long side. For continuing coverage on shares of $VBIO stock, as well as our other hot stock picks, sign up for our free newsletter today and get our next hot stock pick!