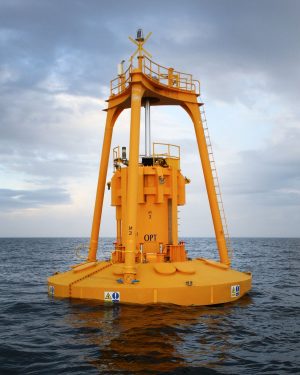 Ocean Power Technologies Inc (NASDAQ:OPTT) went crazy last summer driving shares higher initially rallying from $1.50 to to $6.50 before pulling back. A look at the yearly chart shows these explosive moves. Shares eventually reached $16.00 per share before the move found selling. Today in the pre-market shares were doing a reboot of last summer trading 85% higher, which carried over to the open.

The news from last week was about the delivery of a PB3 PowerBuoy which was deployed off the coast of Kozu-shima Island in Japan as part of its first lease agreement with Mitsui Engineering and Shipbuilding. This is a key execution metric for OPTT as shareholders are wading through the previous volatility trying to determine if they will get traction in execution and revenue.

Ocean Power Technologies Inc’s (NASDAQ:OPTT) PB3 was shipped to Japan in February and arrived in Tokyo on March, 18th, 2017. Upon standard customs processing, the PB3 was transported to Kozu-shima Island where it was staged dockside, and where standard pre-deployment functional checks and preparations were carried out. The deployment of the PB3 and its moorings was completed by a joint team of Penta-Ocean Construction and MES. OPT supported MES with the mooring system specifically for the harsh ocean conditions of Kozu-shima Island.

George H. Kirby, President and Chief Executive Officer at OPT, stated: “This is an exciting time for OPT as we initiate this lease and deploy the PB3 in Japanese waters for the first time. The deployment went well and the PB3 has already exceeded two thousand Watts of peak power. We’re looking forward to leveraging this opportunity to bring our PowerBuoys to Japan and other parts of East Asia.”

OPT’s PB3 is an integrated power and communication platform for remote offshore applications such as subsea and ocean-surface surveillance for security and defense, subsea production operations for oil and gas, and subsea drone docking stations used in the defense and oil and gas markets.  Customers can oftentimes lower operational costs by replacing expensive on-site vessels with a PB3 PowerBuoy, allowing for remote offshore subsea monitoring and control from land-based operations.

The PB3 can also provide substantial power to remote offshore sites when replacing lower-powered solar and battery buoys, oftentimes enabling real-time operational decision making through cellular or satellite communications which is standard on the PB3.

Find out when $OPTT stock reaches critical levels. Subscribe to OracleDispatch.com Right Now by entering your Email in the box below.

The lease agreement calls for a 6-month deployment with the possibility of extension. Throughout its planned deployment, the performance of the PB3 will be monitored with the intent of demonstrating its capabilities for a range of applications.

Mr. Toshihiko Maemura, Manager of the Renewable Energy Project Group of MES, stated, “We are pleased to see the excellent progress of this project. Our collaboration with OPT has been exemplary and we are excited to see the PB3 operating well in Japanese waters.  We are looking forward to a successful ocean demonstration in order to confirm effect of our resonance control and durability of our mooring system.”

Headquartered in New Jersey, Ocean Power Technologies, Inc. (NasdaqMKTS:OPTT) had volatility associated with funding for operations which sent shares lower after going on the conference circuit and joining forces with a banker to assist in operating capital.  They aspire to transform the world through durable, innovative and cost-effective ocean energy solutions.  The PowerBuoy uses ocean waves to provide clean, reliable and persistent electric power and real-time communications for remote offshore applications in markets such as oil and gas, defense, security, ocean observing, telecommunications and more. This is a cool story that has kept investors attention through 2016 and the return to the $3.50 area will get investors excited as technically this reverses the decline around the capital raise.

The real value here is keeping up with how operational milestones are reached, and getting a heads up on how investors flock to these unique energy stocks driven by technology. The PowerBouy and the ability to supply an alternative power source in an isolated area at the right price has big revenue legs for investors to chew on. For continuing coverage on shares of $OPTT stock, as well as our other hot stock picks, sign up for our free newsletter today and get our next hot stock pick!