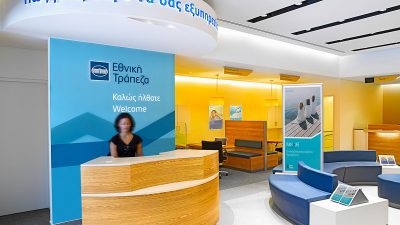 National Bank of Greece (ADR)(OTCMKTS:NBGGY) shares have long been a proxy for the unwinding of the Euro currency and Brexit itself. NBGGY stock has been a trade around the Greek Island’s banking liquidity if you were looking to make money on the Euro going away or the world bailing out the Greek nation and it’s banking system. Shares moved recently, and I don’t think it is due to any significant news, more precisely it may be that the shares have been dormant since December 2015, and it is bad trading advice to short quiet markets.

National Bank of Greece (ADR)(OTCMKTS:NBGGY) is rising for unknown reasons, but it is cool to have a global proxy as part of trade-able stocks we report on regularly.

Let’s look back at what Moodys said in December 2015 when they upgraded all five Greek banks’ BCAs to caa3 from ca reflecting the recapitalizations, and reflect on Moody’s expectations of modest funding improvements that would support profitability, balanced against what they considered the downside risks due to a fragile operating environment.

Greek banks raised approximately EUR14.4 billion of new capital in December 2015, enhancing their loss-absorption capacity and capital metrics. The share capital increases were triggered by the comprehensive assessments conducted by the Single Supervisory Mechanism for the four systemic banks, and the Bank of Greece for the much smaller Attica Bank. Moody’s estimated that the pro-forma common equity Tier 1 ratio for the system improved to around 19% post-recapitalization, from around 11% pre-recapitalization as of September 2015.

Subscribe below and we’ll keep you on top of what’s happening before NGBBY stock makes its next move.

Moody’s noted that although banks’ reported CET1 ratios have increased considerably, deferred tax assets eligible for deferred tax credits continue to form a substantial part of banks’ capital base. While lower than the 70% pre-recapitalization average as of September 2015, the share of eligible DTAs in CET1 capital remains high at around 45% on average for the system post-recapitalization. The rating agency considered this capital to be of inferior quality in view of the Greek sovereign’s weak credit standing and its limited ability to meet around EUR16.8 billion of such outstanding DTAs in the banking system. This was a bleak view of the banking system at the time, which led to shares remaining dormant for more than a year.

Concurrently, Moody’s expected that banks’ reducing funding costs would support pre-provision income in 2016-17, and bottom-lines would be largely driven by the level of provisioning requirements. Following significant provisions that Greek banks had to take in 2015 — triggered by the ECB’s asset quality review (AQR) — loan loss provisions are likely to be significantly lower in 2016-17. Moody’s estimates that system nonperforming loans (NPLs, loans that are 90 days past due) comprised on average around 36.5% of gross loans as of September 2015, while the non-performing exposure ratio (as per the ECB’s definition including performing restructured/forborne and impaired loans for at least 12 months) stood at 49.3%. The rating agency considers that the NPL ratio is likely to peak towards the end of 2016 or early 2017, provided there is political stability and economic conditions that do not deviate materially from the European Commission’s current GDP growth forecast of around -0.7% in 2016 and +2.7% in 2017.

Moody’s considers all five banks have appropriate balances, and these recent improvements in their standalone credit profiles as well as the considerable downside risks stemming from the still fragile operating environment in Greece. Moody’s considers that over the next 12-18 months, banks’ performance will highly depend on political stability in the country and the implementation of the support program’s conditionality, which includes new legislation to overhaul the NPL resolution framework.

NBGGY stock has this nice rally in place, but a word of caution as share price has been to these levels previously in May 2016, so you really need shares to close over the .36 cent level, and unlike many other small stocks this has a wide range of hedgers and players than single stocks we view on a regular basis.  It is nice to incorporate a global view into our daily musings but understand this is a proxy for solving banking problems related to the Euro itself and if it can stay together as a currency.

My question is why a portfolio manager would trade this stock when the Eurocurrency itself is much deeper and easier to trade? The answer is likely that it is a listed stock allowable by most brokers which is why we track it and write about it’s movement as a global indicator for the Euro. Stay tuned and we will update you on any moves from NBGGY stock.  For continuing coverage on shares of NBGGY stock, as well as our other hot stock picks, sign up for our free newsletter today and get our next hot stock pick!