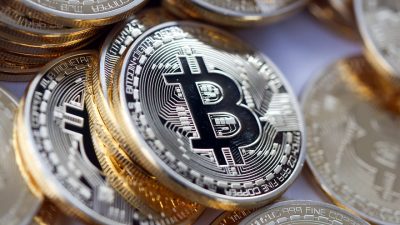 Bitcoin Investment Trust (OTCMKTS:GBTC) is a vehicle to capture the moves happening in the investment in the underlying Bitcoin digital currency price movements, and as an OTCBB listed entry so nearly everyone can trade it day to day, and it is acting as an Index for Bitcoin. It is ironic that although the SEC denied an ETF in Bitcoin, this “quasi index” the OTC introduced more than a year ago has traded side by side with the underlying Bitcoin and its volatile moves.

The investing world is participating here because they can trade this in the normal course of trading on the platform or broker where they trade day to day, where they currently trade smaller stocks now. This was a brilliant move on behalf of the OTC.  The need for another ETF really is not necessary, but the proliferation of trading vehicles around hot sectors always swings far past the mark.

As we look deeper at Bitcoin Investment Trust (OTCMKTS:GBTC) – Note that the SEC is very out of touch in 2017 as demonstrated by the rejection of the recent ETF submitted by the Winklevoss twins and the Bats BZX Exchange. This smacks heavily of cronyism which has existed among the exchanges for decades. The growth of digital currency is potentially one of the larger moves in our lifetime – but only the future will validate this.

In recent news the US Securities and Exchange Commission denied a bid to list a bitcoin-tied exchange-traded fund (ETF), citing the risk of fraud and a lack of regulation among the world’s bitcoin markets. According to an SEC document, “ The decision caps a three-year quest by bitcoin investors Cameron and Tyler Winklevoss, who first sought to list the bitcoin-tied product in mid-2013”.

The SEC has been weighing a proposed rule change that would pave the way for the ETF to be listed on the Bats BZX Exchange. In that time, the SEC has solicited numerous public comments and punted its decision forward several times. As well, the ETF’s backers have expanded the scope of the offering from an initial $20m to $100m.

Subscribe below and we’ll keep you on top of what’s happening before $GBTC stock makes its next move.

That said, the SEC left the door open to future exchange products tied to the digital currency. “The Commission notes that bitcoin is still in the relatively early stages of its development and that, over time, regulated bitcoin-related markets of significant size may develop,” the document reads. “Should such markets develop, the Commission could consider whether a bitcoin ETP would, based on the facts and circumstances then presented, be consistent with the requirements of the Exchange Act.”

As normal the SEC is so far behind the times, and cannot possibly impact the growth of a new digital currency, the recent decision was nothing more than a vain attempt to protect an old guard legacy business around ETF’s versus allowing the Winklevie to join the party. But the horses are out of the barn as companies like GBTC garner attention, volume and share price appreciation.

This stock is up 250% in a year which includes the pullback when the SEC tried to punish the Bitcoin markets on behalf of the larger ETF players and industry brass who may try and control product cycles, they are clearly in cahoots. It is regrettable that the regulatory body for stocks has such an unimpressive record, and a short sighted view of what the customers want. But in reality this has always been the case.

But the quick bounce back in prices shows nothing really can hold down the growth of bitcoin or blockchain, it is inevitable and the sub sector will eventually supplant the exchanges who must retool and lower transaction costs. Trading systems of the future will be monthly fee driven and the important part of their usage will be tracking, following the trading tendencies like they do at Amazon with big data search evaluating the behavior of the investors using the platform of choice.

I applaud those who had the insight to invest in Bitcoin via the OTC listed product Bitcoin Investment Trust (OTCMKTS:GBTC) this product looks like it will continue to track the movements of the digital currency it mirrors, and investors will have the opportunity to trade it as an index (ETF), it is expensive at $184.00 per share, but you can expect a split that will make it more palatable for the retail investor.  I would watch the liquidity as you want to be able to move in and out if the bitcoin itself has drafts of movement in pricing, and bitcoin has a history of moving hard and fast.

Investors will have a host of products to trade in bitcoin and blockchain going forward and currently they are hot sectors in the investment cycle along with cannabis and digital media. These are the hot trading sectors for 2017, know you can always come here to find interesting investment ideas and a way to track the movements of these hot stock symbols. For more news on GBTC and other fast-moving penny stocks, please subscribe to OracleDispatch.com below.