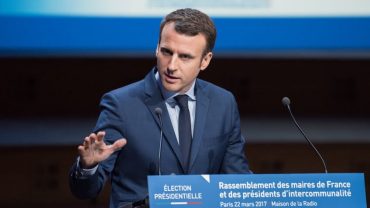 Element Solutions Inc (ESI) shares are trading at lower $12.26 and the avg recommendation for the stock is Moderate Buy, while the current analyst...
Read more
Opinion

NRG Energy Inc. (NRG) shares are trading at lower $32.53 and the avg recommendation for the stock is Strong Buy, while the current analyst...
Read more
Opinion

Brandywine Realty Trust (BDN) shares are trading at lower $9.82 and the avg recommendation for the stock is Hold, while the current analyst price...
Read more
Opinion

Duke Energy Corporation (NYSE:DUK) on the Path to Profitability

Duke Energy Corporation (DUK) shares are trading at higher $92.51 and the avg recommendation for the stock is Moderate Buy, while the current analyst...
Read more

The Elections in France were held over the weekend, and US investors were searching for a stock that would capture any whip saw moves in the market and CARREFOUR SA SPON ADR EACH REPR 1/5 SHS (OTCMKTS:CRRFY) is that volume candidate, and if you look at late Friday afternoon you saw 6 million shares traded hands (where on a normal day may a few hundred thousand would have traded).

Writing early Monday morning I did not see an inordinate amount of volatility post election results, but this is a good proxy to watch as the decision by the electorate of France is digested by the global markets, have a look at the longer term price action for this large French grocer with a big market cap. CRRFY is huge (compared to other stocks we write about) at near $20 billion dollar market cap and is similar to Walmart in the USA, and shares in the stock trade like many big box retailers in the US, the charts below show the large volume increase in front of the election and some price history.

CARREFOUR SA SPON ADR EACH REPR 1/5 SHS (OTCMKTS:CRRFY) operates as a multi-format retailer primarily in France, Spain, Italy and other European countries. Its stores offer fresh produce; local products; consumer goods; and non-food products. As of December 31, 2016, the company operated 11,935 stores under group banners.  In France the sale of local products rose by 2.9% in 2016.

The products of more than 5,000 companies are available on Carrefour shelves, and were the first retailer in the agri-food sector to be presented with the “Responsible supplier relations” label, awarded for three years by the inter-company coordination body of the French Ministry for the Economy and the Compagnie des Dirigeants et Acheteurs de France. This label is awarded by an external assessor for the Group’s responsible practices with respect to food suppliers.

Subscribe below and we’ll keep you on top of what’s happening before $CRRFY stock makes its next move.

Carrefour SA is also involved in banking and insurance activities; property development activities; the provision of travel agency services; the rental of shopping malls; and franchise operations. As of December 31, 2016, the company operated 11,935 stores under group banners, which included 1,462 hypermarkets; 3,227 supermarkets; 7,075 convenience stores; and 171 cash and carry stores. Carrefour SA was founded in 1959 and is based in Boulogne-Billancourt, France.

Carrefour Property unveiled the new extension to the BAB 2 shopping centre. With 40 new stores and an extra 10,000 m², the shopping centre’s unusual architecture features typically Basque colours. It has a total complement of 120 stores, restaurants and services for the 6 million people who visit it every year.

First opened in 1982, the BAB 2 shopping centre is located in the very heart of the Basque Country’s urban community, to the west of Bayonne and just north of Anglet. Based in a highly dynamic urban and business area, it plays a key role in the region’s economic development and contributes actively to a number of major urban projects. Thirty-five years after it was first opened, the centre is now seen as the northern Basque country’s established shopping centre.

The result of close collaboration with local elected representatives, the BAB 2 shopping centre was extended in order to cater to the needs of people living throughout the region who needed a richer store selection hosted in a modern environment, while at the same time supporting the region’s development and its dynamic growth. Consequently, the extension has a completely new selection of stores which are very much in line with the shopping centre’s Basque identity.

So the BAB 2 shopping centre now has a complete offering of 120 stores and restaurants – in addition to the largest Carrefour hypermarket in France’s Pyrénées-Atlantiques département.  In addition to providing a new selection of goods and services, the centre is also breaking new ground by featuring numerous connected services designed to make shopping easier for its customers. On the shopping centre’s website and its mobile app, people on the lookout for a bargain will find new special deals, promotional campaigns, loyalty offers or advantages available at stores for people with Carrefour PASS cards. And people who want to prepare their visit ahead of time can check the availability of certain retailers’ products online and then reserve them with just a click of a mouse. Or they can book an appointment with an optician or a bank, or reserve a slot with their beautician’s.

Proud of its roots and of its Basque identity, the BAB 2 shopping centre integrates harmoniously into the existing centre and is in keeping with Basque architecture. The main thoroughfare of the existing shopping centre has also been entirely renovated and now features an original decor which alludes to traditional Basque sports – rugby, surfing and pelota.

As well as bringing in new retailers who will contribute to the local urban area’s economic appeal, the renovated centre will also create jobs at local level. Throughout the year, the BAB 2 shopping centre stages numerous events in partnership with local sports clubs and charities.

Carrefour SA (OTCMKTS:CRRFY) shares will be effected by the recent election results as speculators trade in and out of their positions, and then they will go back to the core of their business which is being the Walmart of France and most of Europe.

CRRFY stock moves very slowly and deliberately similar to Walmart shares or any big box retailer in the US, they are also dual listed on many exchanges. With the election behind us these shares will return to the bell weather status they have as a go- to retailer. Viva Le France!! For continuing coverage on shares of $CRRFY stock, as well as our other hot stock picks, sign up for our free newsletter today and get our next hot stock pick!