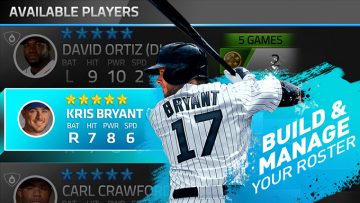 Glu Mobile Inc. (NASDAQ:GLUU) shares are 30% higher in 2017 on the back of a recent earnings release and partnerships with Major League Baseball and Kris Bryant of the Chicago Cubs. The deal announced more than a month ago seemed to be the catalyst for revenue.

I looked back at where shares were trading this time last year, and they had a similar move. This is becoming an annual thing for Glu Mobile. Have a look at some pricing for shares below, and let us examine the deal with Kris Bryant and why this important for Glu as a tool to extend and establish their brand. It will also be important to break out of the trading range they have been in since 2015. The recent rally is giving some clues that the fundamentals are matching up with the technical picture.

If you don’t know what they do, Glu Mobile Inc. (NASDAQ:GLUU) is a leading global developer and publisher of free-to-play mobile games. Last month they announced the availability of MLB Tap Sports Baseball 2017 on the App Store and Google Play.

Coming off of an incredible 2016 season, and for the second year in a row, the Tap Sports Baseball franchise will feature the likeness of the 25-year-old Bryant. The second overall pick in 2013, Bryant has quickly emerged as a top talent and fan-favorite. He made his MLB debut in 2015 where he would go on to earn the Jackie Robinson National League Rookie of the Year award. In 2016, Bryant helped lead the Cubs to a World Series championship and was named the National League Most Valuable Player.

Find out when $GLUU stock reaches critical levels. Subscribe to OracleDispatch.com Right Now by entering your Email in the box below.

“I’m a huge fan of MLB Tap Sports Baseball; that’s why I’m excited to return as the game’s featured player,” said Kris Bryant. “The game is true to the sport of baseball and perfect to play when I have a free minute on the road!”

“The Tap Sports Baseball franchise has achieved consistent year-over-year growth for Glu and we couldn’t be more excited for the user response to our partnerships with MLB, MLBPA and MLBPAA,” said Glu President and CEO Nick Earl. “Led by a team with the freedom to collaborate and a genuine love for the game, we’re proud to deliver a visually stunning, competitive, and deeply social game play experience.”

“We’re thrilled with Glu’s continued development of the Tap Sports Baseball franchise and know our fans will just love to play the new release as another way to engage with their favorite teams and players,” said Jamie Leece, Vice President of Games and VR for MLBAM.

“We’re looking forward to the release of MLB Tap Sports Baseball 2017, as Glu Mobile continues to develop a fun and easy-to-play game that allows fans from around the world another way to engage with their favorite players and the sport of baseball anywhere and at any time,” said Evan Kaplan, Director, Licensing & Business Development for the MLBPA.

Glu Mobile Inc. (NasdaqMKTS: GLUU) is focused on creating compelling original IP games and was founded in 2001 in San Francisco and is at the heart of the developer world.  They key for the company is exceeding the highs they achieved last year and breaking out of the trading range they are stuck in.

Shares traded much higher in previous years, and like the Chicago Cubs they need to break this trading range curse where they are currently mired. I just went and downloaded the App !! Go Cubs !! I am pulling for you guys at Glu Mobile and as a Cub fan I have learned many lessons about patience. For continuing coverage on shares of GLUU stock, as well as our other hot stock picks, sign up for our free newsletter today and get our next hot stock pick!