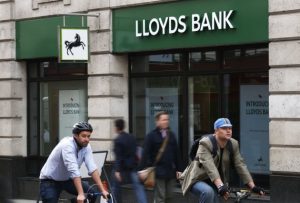 Atlassian Corporation Plc (TEAM) shares are trading at lower $203.08 and the avg recommendation for the stock is Moderate Buy, while the current analyst...
Read more
Wall Street Daily

Xcel Energy Inc. (XEL) shares are trading at lower $71.41 and the avg recommendation for the stock is Moderate Buy, while the current analyst...
Read more
Wall Street Daily

Urban Outfitters Inc. (URBN) shares are trading at higher $24.64 and the avg recommendation for the stock is Moderate Buy, while the current analyst...
Read more

Lloyds Banking Group PLC (ADR) (NYSE:LYG) is the European version of JP Morgan or Citibank in the US. LYG stock was trading $45 dollars per share before the housing market collapse where all major banks were bailed out. Lloyds Banking Group was bailed out and reshaped its business into simple retail and business lending.

Lloyds Banking Group PLC (ADR) (NYSE:LYG) shares traded down to $3.00 during the bailout and fell to $1.50 at the lowest point. They had a nice rally off these lows, and then had trouble into Brexit.  Recently they are looking like they made an important bottom, and the price action (see chart below) makes me think European Banks may be out of the woods.

“The story of this bank is you’re shedding the bad stuff, so that the statutory return on equity comes closer to underlying return on equity — and at that point you’re back to normal,” said Eric Moore, a fund manager at Miton Group. “Lloyds is the furthest along the road to recovery, the closest to being boring, but boring is good in banking.” Capital reserves strengthened in the first quarter, with the bank reporting a common equity tier-one ratio of 14.5 per cent, compared with 13.8 per cent at the end of last year.

One key problem for Lloyds was its reliance on precarious wholesale funding following the takeover of HBOS. Under Mr Horta-Osório, the bank has reduced its exposure to wholesale funding with a maturity of less than one year from £150bn at the end of 2010 to £31bn. Mr Horta-Osório has said over the past couple of years that he is not seeking to expand the bank’s mortgage book by engaging in a price war, in order to preserve its net interest margin — the difference between the interest it gains from lending and pays out on deposits. Lending contracted by 1 per cent year on year, amounting to a balance of £445bn at the end of the first quarter. Lloyds said it expected its mortgage balances to “stabilize and then grow” this year, to close in line with last year.

“I don’t believe Lloyds aspires to, or will become, a growth stock,” said Ian Gordon, an analyst at Investec. “It’s a mature business, sensibly managing the trade off between margin and volume to good effect.”

Charges for past misconduct and litigation are still hurting the bank’s bottom line. Lloyds set aside 350 million pounds in the first quarter for mis-selling payment protection insurance and a 100 million-pound provision linked to a fraud scandal at its HBOS commercial lending business, charges it had previously warned investors about. The lender also set aside 100 million pounds for other retail conduct matters, which it didn’t explain further.

Find out when $LYG stock reaches critical levels. Subscribe to OracleDispatch.com Right Now by entering your Email in the box below.

The results show “our ability to respond to a challenging operating environment,” Horta-Osorio said in the statement. “The U.K. economy continues to benefit from low unemployment and reduced levels of indebtedness.”

Of key importance to the bank is whether impairments for souring loans will rise after years of low provisions as the BOE keeps interest rates on hold. Loan impairments fell to 127 million pounds from 149 million pounds in the first period of 2016, beating estimates from UBS Group AG analyst Jason Napier for an increase to 250 million pounds.

Shares in Lloyds Banking Group (NYSEMKTS:LYG) are up 20% for the year and are showing technical signs of a bottom but need to close above the Brexit levels from where they fell above $4.00 per share, and you need multiple closes above here on big than average volume.  This will not be an easy task, and this is a slow moving beer wagon of a stock just lumbering down the road.

There are many risks associated with Lloyds Banking Group, but make no mistake, by investing here you are making a bet that the global economy has turned. Its also a wager that rates in Europe will go higher, and the Euro rally’s weakens the Dollar.

This is a multifaceted bet, but based on what is happening in the stock and the performance of the stock since the Brexit sell off in July 2016 shares are acting as if the hard bet of being long European Bank stocks may be the right one. For continuing coverage on shares of Lloyds Banking Group stock, as well as our other hot stock picks, sign up for our free newsletter today and get our next hot stock pick!