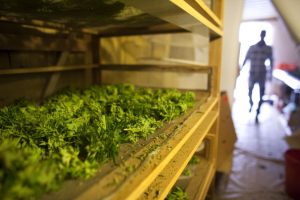 Greengro Technologies Inc (OTCMKTS:GRNH) followed the valuation path of all stocks in the cannabis sector by rallying from .04 to .16 cents in October last year. This price action got investors to look at the company fundamentals. The track of GRNH since this initial move shows a rally in January followed by a selloff that has not really changed the lower trending action. A look at the chart will show this decline, and raise some questions about what needs to happen fundamentally to reverse this trend.

GRNH is a world-class provider of eco-friendly green technologies and received a $600,000 down payment on a $7.4 million flagship three-acre turnkey off-grid PV-solar glass greenhouse from Fresh Local Produce of Ohio, an indoor hydroponic farming company based in Akron, Ohio.  The companies expect to be breaking ground on the new facility in the third quarter of 2017.

Find out when $GRNH stock reaches critical levels. Subscribe to OracleDispatch.com Right Now by entering your Email in the box below.

End user customers for GRNH’s franchise program include companies in the field of leafy green produce production and distribution; such as, lettuce producers and processors. GRNH plans on generating a recurring revenue stream from several scheduled three-acre Greengro Glass Greenhouse Franchise locations across the U.S.

“This initial transaction with Fresh Local Produce of Ohio is an exciting development for Greengro Technologies,” said Greengro CEO James Haas.  “We are very pleased to be working with Greengro’s finance sources, which have been key in bringing this rewarding partnership to life.”

The sale of a Greengro Glass Greenhouse Franchise to Fresh Local Produce of Ohio follows on the heels of GRNH’s acquisition of a 51% majority interest in Biodynamics LLC, an Akron, Ohio-based leader in controlled environment agriculture (CEA), renewable energy and consumer hydroponics.  As part of that transaction, Biodynamics’ CEO Tim Madden was named Greengro Technologies’ COO.

At the time, Madden said: “Greengro’s recent merger with Biodynamics is yielding record sales for Greengro Technologies, as evidenced by this multi-million dollar deal with Fresh Local Produce of Ohio.”

As a result of this sale to Fresh Local Produce of Ohio, Greengro’s revenues have reached the range of a minimum of $8 million for 2017, according to Haas, who said that Greengro 2016 revenues were approximately $1.1 million.

“This transaction boosts Greengro into record setting income territory for the company,” said Haas. “Our acquisition of Biodynamics was definitely a decisive move toward Greengro’s strategy for significant advancement.”

The market potential for growing lettuce in greenhouses is significant at this stage, noted Haas. He said that advanced CEA facilities can annually produce approximately nine million heads of fresh, crisp lettuce within three acres. With an estimated per-head value of $.75, potential revenues from the greenhouse production of lettuce alone could be very lucrative.

Greengro Technologies Inc (OTCMKTS:GRNH) expects to be breaking ground on the new facility in the third quarter of 2017. It brings together community and commerce through the growth and distribution of healthy, nutritious foods and vital medicines backed by science and technology. Customers include restaurants, community gardens, and small and large-scale commercial clients.

The Bottom Line: Acceptance is needed more in the smallcap investing world, so the trick will be converting these local users to shareholders and keeping them as long-term investors. The company is currently trading at a $22.47M market cap and has a history of remarkable moves making it a company to watch. For continuing coverage on shares of $GRNH stock, as well as our other hot stock picks, sign up for our free newsletter today and get our next hot stock pick!