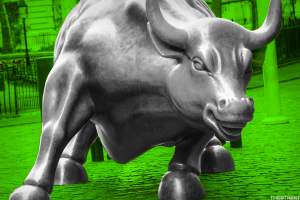 Amfil Technologies Inc (OTCMKTS:AMFE) would be forgiven for putting last year firmly to the back of their mind as a steady downward trend in the first half of 2016 left the share price floundering at $0.0015, before gaining back some of those losses in the latter part of the year closing at $0.0081 on December 27th. This year however has been quite the opposite to say the least as evidenced by a daily chart that one can only dream of.

The bullish momentum continued from the back end of 2016 into the very beginning of 2017, taking very little pause to rest on its quick ascent up, even the red days have large lower wicks showing bulls buying the dip at any available opportunity. New highs for the year were set on Feb 8th at $0.0290, with the first significant profit taking happening on this day as evidenced by the large upper wick. This was followed by some much needed healthy consolidation as the price pulled back to the $0.0140 area in early March, but more importantly it found a solid support line in the 50 day Moving Average. After multiple bounces off this support line and even after breaking it on March 8th, its validity was confirmed as the bulls showed up with gusto the following day. From then on it was followed by another steep bull leg up to a high of $0.0953 on the 2nd of may before the bearish MACD cross finally occurred leading to a moderate pullback towards the 50MA line. The price currently sits at $0.0790 and again has the comfort of that 50MA support line just below it.

Amfil Technologies Inc (OTCMKTS:AMFE) took a new business approach beginning in 2013 when management changed. The company now focuses primarily on the acquisition of income generating private companies and optimizing their operations under the Amfil Technologies umbrella.

The company has three subsidiaries , the first being Interloc-Kings which is an established hardscape construction and winter services provider to the Greater Toronto area & York Region, in Ontario, Canada. The second, Snakes & Lagers and Snakes & Lattes are the operators of board game themed bars and cafes in downtown Toronto, Ontario, Canada. The third and the one that is most relevant at the moment  is Grozone.  Amfil has developed the mPact GROZONE Antimicrobial System which is an ozone based antimicrobial/sanitization technology, specifically designed and calibrated for the medical and legal recreational marijuana industry. The system provides an environmentally friendly solution to eliminate pests, bacteria and mold from grow facilities whilst reducing /eliminating the need for chemicals or pesticides. With the Marijuana industry set to take off once again this year, the company stands to generate significant revenue with this essential waste mitigation system. The target market has since expanded from the medical marijuana into the recreational sector as more states have adopted legalization, and is  also used in facilities processing extracts and producing edible products to ensure they adhere to stringent food/drug safety standards and regulation. GROzone was developed from the existing mPact ozone technology which has been servicing the food/ beverage industry for years with successful installations for major clients such as Pepsi, Nestle, Sun Pacific and Sysco Foods.

This is obviously great news for AMFE and explains the continued surge in their stock price this year with exciting times ahead as Green Rush 2.0 kicks off. After the pullback in May and early June, this could be the ideal opportunity for investors looking to get in with the RSI cooled off, the trusty 50MA acting as support and potential MACD bullcross in close sight. For continuing coverage on shares of Amfil Technologies stock, as well as our other hot breakout picks, sign up for our free newsletter today and get our next hot stock pick!