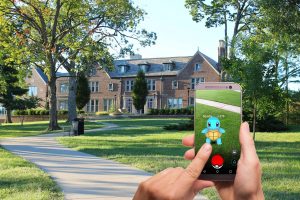 Freeze Tag, Inc. (OTCMKTS:FRZT) is up an astounding 1800% since mid-May, and continues to be one of the hottest stocks on the OTC, so here’s whats going on with the company. The California-based FRZT announced a much anticipated Garfield game two months back and the share price bounced on the news. The game is being trumpeted as a Pokemon Go, (but with Garfield) and so far reviews of the game are very positive.

“We’re ecstatic with the results of our product launch of Garfield GO,” said Craig Holland, CEO of Freeze Tag, “App ratings and player engagement (how long and how often players come back to play the game) are beyond our expectations. Many players have already won real prizes.”

Freeze Tag, Inc. (OTCMKTS:FRZT), according to company documents, designs games encouraging players to compete and engage with their friends on social networks, such as Facebook and Twitter. Its mobile games include Victorian MysteriesO and Unsolved Mystery ClubO, as well as digital entertainment, such as Etch A SketchO.

FRZT markets, sells and distributes its games primarily through direct-to-consumer digital storefronts, such as Apple’s App Store, the Google Play Store and Amazon’s App store. In addition to publishing its smartphone games on direct-to-consumer digital storefronts, the Company also publishes some of its titles on other platforms, such as the Facebook App Store, the Mac App Store and personal computer (PC) Download portals, such as Big Fish Games and Gamehouse.

You can find out when $FRZT stock reaches critical levels. Subscribe to OracleDispatch.com Right Now by entering your Email in the box below.

In less than one week from launch, Freeze Tag announced that Garfield GO has received hundreds of 5 star ratings from players on Apple’s App Store and Google’s Play Store. Many bloggers and game reviewers have also chimed in with their approval and support for Garfield GO as a family friendly fun activity for the summer.

To celebrate the good news and Garfield’s 39th birthday, FRZT is offering a limited edition virtual birthday hat within the Garfield GO game. Only available until June 30, players can acquire the spectacular cake hat by finding it in treasure chests or purchasing it from the hat store.

To help spread the word about the new content, FRZT announced they are continuing to work with their partners Paws, Inc. and Munzee to introduce Garfield GO to the large fan base of both companies. The company also reported they are promoting the game through advertising channels such as Facebook to grow the user base.

Back in November of last year FRZT signed a licensing agreement with Paws Inc., the licensing, marketing and creative company behind the iconic Garfield comic strip. According to management, Freeze Tag is working on two different titles that incorporate various Garfield world character artwork and dialogue. More specific information about launch dates will be forthcoming. Jim Davis, creator of the Garfield comics said at the time “Freeze Tag’s style and game designs are a perfect fit for our characters. Garfield wants to know if he gets any free pizza out of the deal.”

Freeze Tag, Inc. (OTCMKTS:FRZT) is leveraging a bit of nostalgia mixed with the success of Pokemon Go! It is a good strategy but investors will have to watch for sustained success. The stock has held a good portion of its highs from this month and its seems to be out of dormancy. Check back in with us as we offer more updates. For continuing coverage on shares of $FRZT stock, as well as our other breakout stock picks, sign up for our free newsletter today and get our next hot stock pick!