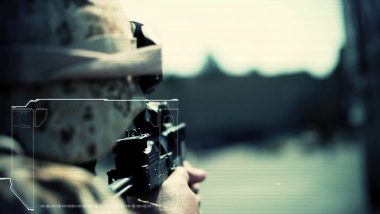 Defense Technologies International Corp (OTCMKTS:DTII) is a sub-penny play with technology aimed at the defense and military space. The stock was a major high-flyer back in March of this year, when it blasted higher on a combination of themes, including the cancellation of a planned reverse split, some balance sheet clean-up, and apparent speculation that the company might benefit from Trumpian government initiatives. But why the big move now?

This time around, the buzz is back in shares of the stock on continued signs of balance sheet clean-up underway at the Las Vegas company. Specifically, the company announced it has reduced its corporate debt by $175,182. According to the release, the move comes as an extension of the Debt Reduction of $500,000 as announced in March. That would seem to indicate a total liability elimination of just over $675K during the months of February 2017 to May 31, 2017.

Find out when $DTII stock reaches critical levels. Subscribe to OracleDispatch.com Right Now by entering your Email in the box below.

As noted above, the company has been taking the job of balance sheet cleansing very seriously so far in 2017. That is enormously important given that the balance sheet was in very poor shape at the outset of the year, with well over $2M in current liabilities stacked up against an empty pocket where cash is concerned. The problem with that kind of situation is the impact it has on larger investors who might be willing to take a chance on a speculative tech play but for the dilution risk.

“Defense Technologies remains committed to starting production of its Non-X-ray Scanner in the very near future. We have initiated negotiations with a Swiss Corporation, a former Lender and Shareholder, to secure future necessary production funding. We appreciate and thank all our shareholders for their support,” stated Defense Technologies International Corp. CEO Merrill Moses.

According to the addendum on its most recent press release, the Company’s ‘Passive Security Scan’ is a unique “next generation” walk-through detector scanning unit. “This patented and trademarked passive scanning system allows for detecting and identifying concealed threats such as guns, knives, etc. Unlike other scanners the public is more familiar with, the Passive Security Scan does NOT use X-rays to detect threats… Serious health concerns have been raised over the repeated exposure to X-rays from other scanning machines currently in use.  The Passive Security Scan technology is based on the ‘Earth Magnetic Fields’ has no emission whatsoever and is therefore extremely safe and harmless to the person passing through our portal.”

The chart shows better than 120% piled on for shareholders of the listing during the trailing week, but that move comes in the context of a larger bearish trend. Market participants may want to pay attention to this stock. DTII has a track record that includes a number of dramatic bounces. In addition, the listing has registered increased average transaction volume recently, with the past month seeing 74% over what the stock has registered over the longer term.

Now commanding a market cap of $0.8M, DTII has virtually no cash on the books, which stands against about $1.5M in total current liabilities according to our own in-house calculations – which is a strong improvement over the data shown in March. The company is pre-revenue at this point. As more color becomes clear on the name, we will review the situation and update our take. For continuing coverage on shares of $DTII stock, as well as our other hot stock picks, sign up for our free newsletter today and get our next hot stock pick!