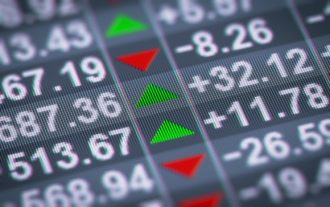 Digital Power Corporation (NYSEMKT:DPW) saw a huge surge in bull volume on the last day of June with the price soaring a massive 120% on the previous day to reach a high of $1.05. A lot of traders then took profit driving the price down to close at 72 cents.

After a dismal 2015, which saw the stock price in free fall for most of the year, 2016 looked like it could be the year of revival for the California-based power supply company. The year started off at the 60 cents mark, but quickly declined to 35 cents by the end of May. This proved to be the low for the year and soon saw incredible rallies during the summer months of June, July and August hitting a peak of $1.40 on July 5th 2016. Unfortunately, these periods of bullish action didn’t seem to last long as they were always followed by significant profit taking. The stock stayed in consolidation mode for the rest of the year closing at 65 cents. This sluggish price action continued into 2017 before a huge spike in price hitting a high of $1.75 on March 15th. Again, this could not be sustained as we saw a continuous decline to 43 cents on June 29th before the rally on Friday.

Find out when $DPW  stock reaches critical levels. Subscribe to OracleDispatch.com Right Now by entering your Email in the box below.

DPW is known as one of the first to initiate product lines that have extremely adaptable architectures to ensure that non-standard output voltage requests from customers could be met. This led to the production of high density power supplies that allowed it to establish a foothold in the telecom market and provide power output in smaller package sizes than had previously been commercially available.

DPW has evolved to become a global force in various areas including power density technology development and has  increased production volumes by augmenting its manufacturing volumes in Asia, allowing them to deliver competitive prices to its customers and still retain high production quality. DPW operates globally but is focused on the North American and European markets.

President and CEO Amos Kohn stated: “Our net loss of $1,122,000 for the year ended December 31, 2016, included $543,000 of stock options and $32,000 of discount amortization expenses. Excluding these non-cash related expenses, our net loss would have been $547,000 for the year ended December 31, 2016. While we are somewhat disappointed with the magnitude of the loss reported for the past year, it is important to note that 52% of the loss in 2016 was attributable to non-cash related expenses in addition to losses that were attributed our sale of Telkoor Telecom shares and our investment in building for our future growth”

In other news, in May, DPW announced that it signed a distribution agreement with VOX Power Ltd. (VOX), a provider of state-of-the-art AC/DC modular configurable power supplies to global industrial, medical and defense markets. The aim is to provide the market with the most advanced and power dense solutions available and give their customers a vast degree of extra flexibility with multiple output solutions now being available.

After a difficult few years, the outlook for Digital Power Corporation (NYSEMKT:DPW) most definitely looks brighter, with its collaboration with VOX Power and expanding its product line there is reason for investors to be quietly optimistic. For continuing coverage on shares of Digital Power’s stock, as well as our other breakout stock picks, sign up for our free newsletter today and get our next hot stock pick!