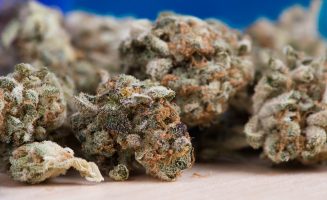 AURORA CANNABIS IN COM NPV (OTCMKTS:ACBFF) is a core play in the Canadian cannabis production patch. We became quite bullish on ACBFF again this summer after getting a bit cautious on shares this Spring when it seemed like an awful lot of supply was starting to leak into the picture in Canada despite an exuberant tone among investors. However, we see ACBFF has a ton of cash, very little debt, and huge top line growth.

At this point, ACBFF is running higher in front of this week’s start to trading of shares on the Toronto Stock Exchange. We would note that a major shift in availability and liquidity of trade often spurs a run such as the one we have been seeing in recent days. However, it’s often followed by a hangover of sorts, so traders might want to be wary of that type of action this week as well. For those not familiar with the name, here’s a brief overview.

As noted above, shares of ACBFF have been ripping higher in recent days in front of the first action for the stock on the TSX.

“We are achieving record yields at our Mountain View County production facility, progressing rapidly with the construction of our 100,000+ kg per annum Aurora Sky facility at Edmonton International Airport, and are executing consistently on our national and international expansion strategy. The acquisition of our third production facility, in Pointe-Claire , Québec will further support our domestic growth. Our acquisition of Pedanios, Germany’s largest medical cannabis distributor, and our strategic investment in Australia’s Cann Group, have established Aurora as a global leader in the cannabis sector. Aurora continues to drive innovation in the industry, as evidenced by our research collaboration with and investment in Radient Technologies, the launch and upgrades of our one-of-a-kind mobile application, and the expansion of our same-day and next-day delivery program. We expect that graduating to TSX will further increase our shareholder audience, and represents another important strategic step in enhancing shareholder value.”

In all, the chart shows 25% added to share values of the name over the past month of action. Market participants may want to pay attention to this stock. ACBFF has evidenced sudden upward volatility on many prior occasions. Moreover, the company has seen an influx in interest of late, with the stock’s recent average trading volume running 55% over the long run average.

Currently trading at a market capitalization of $678.77M, ACBFF has a significant war chest ($118.1M) of cash on the books, which compares with virtually no total current liabilities. ACBFF is pulling in trailing 12-month revenues of $13.4M. In addition, the company is seeing major top line growth, with y/y quarterly revenues growing at 2260.7%. This may be a very interesting story and we will look forward to updating it again soon. For continuing coverage on shares of $ACBFF stock, as well as our other hot stock picks, sign up for our free newsletter today and get our next hot stock pick!