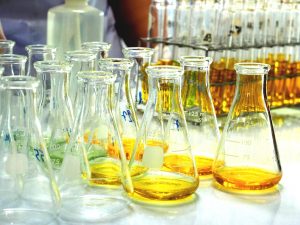 Cannabics Pharmaceuticals Inc (OTCMKTS:CNBX) shares have started to really show up again after a deep and lengthy period of stiff corrective action this Spring and early Summer. Of course, that weakness comes on the heels of one of the most dramatic and powerful bull runs of any stock on the OTC in February. CNBX’s most recent catalyst hit to kick off this week when the company announced it has established a Genetic lab that will develop diagnostic tools based on human genome, tumor genetics and cannabinoids.

According to the release, CNBX recruited Dr. Moran Grinberg to serve as its VP of R&D and to lead the Genetic research. Moran has a PhD in Virology and MSc in clinical pharmacology with vast experience in conceptualizing and executing pharmacological research. The immediate impact of the announcement has been a sharp bid in price per share, with the stock breaking out today above the closing levels defining its recent trading range.

Cannabics Pharmaceuticals Inc (OTCMKTS:CNBX) bills itself as a U.S based public company dedicated to the development of Personalized Anti-Cancer and Palliative treatments.

CNBX has been an exciting story in the space, with reports of a diagnostics technology supposedly positioned to revolutionize the way physicians identify disease in cancer patients in terms of a coordinated cannabinoids therapy program.

CNBX’s scientific focus is on identifying and harnessing the therapeutic properties of specific natural Cannabinoids.

As noted above, the stock was on a run to start this week in response to the company’s announcement of a new Genetic lab that will develop diagnostic tools based on human genome, tumor genetics and cannabinoids. Clearly, while this one of those “big idea” releases that often sound great but don’t necessarily imply a ton of real action for an OTC stock with light trailing 12-month top line numbers, the market has decided to extend a bit of the “benefit of the doubt” in early week action for the stock.

Dr. Eyal Ballan, Co-founder and CTO, said: “Our mission is to commercialize a wide range of diagnostic tools that incorporate novel technologies to retrieve better outcomes of cannabinoid treatments. Understanding the genetics of cancer-cannabinoids relations complements our CTC cell count and drug sensitivity capabilities. We are pleased to have Dr. Moran Grinberg in our team and looking forward to joining forces.”

We’ve witnessed 54% tacked on to share pricing for the stock in the past month, a bounce that has taken root amid largely bearish action over the larger time frame. However, CNBX has a track record that includes a number of dramatic bounces. In addition, the listing has benefitted from a jump in recent trading volume to the tune of 87% above the average volume levels in play in this stock over the longer term.

Traders should note this as important with the stock trading on a float that is tight at just 30.9M shares. This type of thing is something to watch out for: with such a tight trading float, this kind of ramping interest can force a supply-shock squeeze.

Currently trading at a market capitalization of $202.94M, CNBX has a significant war chest ($3.2M) of cash on the books, which must be weighed relative to virtually no total current liabilities. CNBX is pulling in trailing 12-month revenues of $53K. However, the company is seeing declines on the top line on a quarterly y/y basis, with revenues falling at -96.9%. This may be a very interesting story and we will look forward to updating it again soon. For continuing coverage on shares of $CNBX stock, as well as our other breakout picks, sign up for our free newsletter today and get our next hot stock pick!