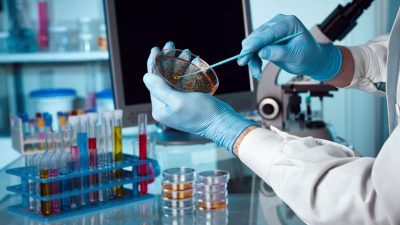 Moleculin Biotech Inc (NASDAQ:MBRX) has been back on the radar for traders of low-priced stocks in the biotech space of late. Shares of MBRX have been on the move since they broke sharply higher to kick off a busy July on news of a discovery in its collaboration with M.D. Anderson Cancer Center with regards to a potential treatment for pancreatic cancer. As we last reported, “the discovery, which the company has quickly termed WP1234, builds on the mechanism of action of its primary pipeline asset, the similarly named WP1122, which MBRX is currently investigating as a potential brain cancer treatment.”  Here are the details.

The latest from the company is its announcement that it has agreed to provide support to help accelerate the start of a physician-sponsored Investigational New Drug (IND) application to study the Company’s drug candidate WP1066 for the treatment of adult glioblastoma (brain tumors). The combination suggests this is currently a very active pipeline, which is why we felt it was a good idea to get it on your radar.

Moleculin Biotech Inc (NASDAQ:MBRX) trumpets itself as a preclinical-stage pharmaceutical company that focuses on the development of anti-cancer drug candidates.

Its lead drug candidate is liposomal Annamycin, an anthracycline intended for the treatment of relapsed or refractory acute myeloid leukemia. The company also develops other drugs, including WP1066 Portfolio that focuses on the modulation of regulatory transcription factors involved in the progression of cancer; and WP1122 Portfolio, a suite of molecules targeting the metabolic processes involved in cancer and glioblastoma.

The company has an agreement with Mayo Clinic to enable additional research on its WP1066 molecule for the possible treatment of a rare form of pediatric brain tumor. Moleculin Biotech, Inc. was founded in 2015 and is headquartered in Houston, Texas.

According to company materials, “Moleculin Biotech, Inc. is a preclinical stage pharmaceutical company focused on the development of anti-cancer drug candidates, some of which are based on discoveries made at M.D. Anderson Cancer Center. Our lead product candidate is Annamycin, an anthracycline being studied for the treatment of relapsed or refractory acute myeloid leukemia, more commonly referred to as AML. We also have two preclinical small molecule portfolios, one of which is focused on the modulation of hard-to-target tumor cell signaling mechanisms and the recruitment of the patient’s own immune system. The other portfolio targets the metabolism of tumors.”

Find out when $MBRX stock reaches critical levels. Subscribe to OracleDispatch.com Right Now by entering your Email in the box below.

As noted above, MBRX suddenly would appear to have quite an active pipeline, making the stock an important vehicle for small and microcap biotech traders to track.

Dr. Robert Shepard, Moleculin’s Chief Medical Officer added: “We have never seen a drug like WP1066 that appears capable in vitro of both stimulating a natural immune response and directly killing tumor cells to block tumor progression. There continues to be a serious unmet need for the treatment of glioblastomas, the most aggressive and lethal form of brain cancer, which is why we are working so hard and are excited to get WP1066 into the clinic.”

A recent Facebook post by MD Anderson Brain and Spine expanded: “The drug, known as WP1066, is modeled after a natural compound that has certain tumor-fighting properties. WP1066 amplifies these properties to potent levels, and it can cross the blood-brain barrier. WP1066 belongs to a class of drugs known as STAT3 inhibitors; they prevent tumors from using the STAT3 pathway to evade the immune system. WP1066 can also induce tumor cell death. It’s effective against human glioblastoma in preclinical models. The next step is to see if this unique drug is effective when given to glioblastoma patients.”

“By providing additional guidance and data, we think we can help accelerate the ability of the physician investigator to respond to FDA’s requests in a way that will allow the study to begin,” commented Walter Klemp, CEO of Moleculin, “which we believe could position WP1066 for a brain tumor trial this year.”

The chart shows 48% during the past three weeks in terms of shareholder gains in the listing, a bounce that has taken root amid largely bearish action over the larger time frame. The situation may be worth watching. MBRX has a history of dramatic rallies. Moreover, the stock has witnessed a pop in interest, as transaction volume levels have recently pushed 18% over the long run average.

Currently trading at a market capitalization of $40.1M, MBRX has a significant war chest ($8.9M) of reported cash on the books, which stands against about $108K in total current liabilities. The company is pre-revenue at this point. We will update the story again soon as further details emerge. For continuing coverage on shares of $MBRX stock, as well as our other breakout picks, sign up for our free newsletter today and get our next hot stock pick!

Disclosure: we hold no position in $MBRX, either long or short, and we have not been compensated for this article.