Easton Pharmaceuticals Inc (OTCMKTS:EAPH) Gets Serious About the Marijuana Segment 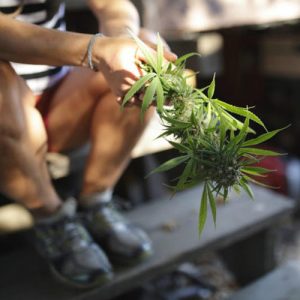 Teradata Corporation (TDC) shares are trading at lower $19.18 and the avg recommendation for the stock is Hold, while the current analyst price target...
Read more
Wall Street Daily

Portland General Electric Company (POR) shares are trading at lower $40.68 and the avg recommendation for the stock is Moderate Buy, while the current...
Read more
Wall Street Daily

Tenneco Inc. (TEN) shares are trading at lower $8.90 and the avg recommendation for the stock is Hold, while the current analyst price target...
Read more
Wall Street Daily

YETI Holdings Inc. (YETI) shares are trading at higher $53.07 and the avg recommendation for the stock is Strong Buy, while the current analyst...
Read more

Easton Pharmaceuticals Inc (OTCMKTS:EAPH) is a penny play that appears to be heading into the cannabis patch on a larger level. EAPH just announced, pursuant to its closing agreement with Canadian based “Alliance Group”, EAPH has advanced $575,000 towards its acquired interest in 45 acres of a 135-acre fully owned parcel of land for the cultivation, production and sale of medical / recreational marijuana to the cannabis industry and towards other revenue producing businesses.

Traders will note 23% during the past week in terms of shareholder gains in EAPH but this action is running counter to the larger trend in the name. Market participants may want to pay attention to this stock. EAPH has evidenced sudden upward volatility on many prior occasions. Furthermore, the listing has seen interest climb, with an increase in recent trading volume of 57% above its longer run average levels.

According to company materials, “EAPH is a diversified specialty pharmaceutical company involved in various pharmaceutical sectors and other growing industries. The Company previously developed and owned an FDA-approved wound-healing medical device and currently owns topically delivered drugs to treat cancer and other therapeutic products to treat various conditions that are all in various stages of development and approval. Easton has partnered with BMV Medica and together, own the exclusive distribution rights in Mexico and Latin America for patented women’s diagnostic and preventative care products, along with two generic cancer drugs Paclitaxel and Docetaxel.”

EAPH is apparently also developing XILIVE, an early stage cancer drug. In addition, it is involved in the medical marijuana business. It was formerly known as LAM Industries, Inc. and changed its name in March 2010.

Find out when $EAPH reaches critical levels. Subscribe to OracleDispatch.com Right Now by entering your Email in the box below.

As noted above, we have reported in the past that EAPH was “involved” in the medical marijuana space. However, it has been tough to see clear operational signs that the pot segment was being actively emphasized by management or the board.

However, this latest move suggests more tangible commitment to that pursuit.

According to the company’s latest release, “pursuant to the agreement, Easton Pharmaceuticals has thus far paid $575,000 CDN of $1.3 million CDN to Toronto based Alliance Group to acquire an interest in 45 acres of agriculturally zoned land north of Toronto, Ontario, Canada to cultivate, produce and facilitate the sale of its production of medical marijuana and other lucrative revenue producing businesses on a co-managed basis. Alliance has already initiated the process to legally grow medical / recreational marijuana which it anticipates receiving and conveying positive news on within the next 30 to 60 days. Until such time that approvals and revenues can be generated with cultivating and distributing medical / recreational marijuana, Easton will receive 50% of all revenues on Alliance’s aggregate businesses, which will start generating revenues within the next 30 days with contracts and purchase orders currently in place which will be announced on a subsequent release. The aggregate business is estimated to generate several millions of dollars in its first year with significant profit margins. Easton’s investment and guarantee on revenues are further securitized by the 135-acre property which has recently been given an independent appraised value in excess of $8,000,000, substantially greater than the original estimate used for Easton’s investment.”

The CEO of Alliance Partners stated, “We are very pleased to have entered and closed with Easton Pharmaceuticals as we believe Easton’s investment and partnership will be very lucrative to both parties. Additional positive updates are forthcoming.”

Now commanding a market cap of $23.78M, EAPH has virtually no cash on the books, which compares with about $155K in total current liabilities. One should also note that debt has been growing over recent quarters. The company is pre-revenue at this point. We will update the story again soon as developments transpire. For continuing coverage on shares of $EAPH stock, as well as our other hot stock picks, sign up for our free newsletter today and get our next hot stock pick!

Disclosure: We hold no position in $EAPH, either long or short, and we have not been compensated for this article.