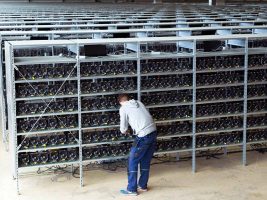 Ball Corporation (BLL)’s Stock is Jumping, Here is Why

Ball Corporation (BLL) shares are trading at higher $96.30 and the avg recommendation for the stock is Moderate Buy, while the current analyst price...
Read more
Sector News

Polar Power Inc. (POLA) shares are trading at lower $4.96 and the avg recommendation for the stock is Moderate Buy. To add more color...
Read more

MGT Capital Investments Inc. (OTCMKTS:MGTI) has been melting lower over the past 3 months. The company has repeatedly doubled down on its strategy of being a core Bitcoin mining play, getting away from its broader cybersecurity identity when it parted ways with John McAfee in January. This strategy has backfired a bit as the cryptocurrency space has been in a relatively bearish environment, led by Bitcoin itself, over that time.

Now, finally, we are starting to see some proactive shifts that reflect the type of rebuilding that we would expect given the context the company is working through. The key recent move is given by the company’s most recent announcement of the appointment of Robert S. Lowrey as Chief Financial Officer, Treasurer, and Secretary of MGT.

MGT Capital Investments Inc. (OTCMKTS:MGTI) recently pivoted its operations entirely into the cryptocurrency space, ramping up its Bitcoin mining operations in the state of Washington and northern Sweden, and divested itself of its cybersecurity segment.

According to company materials, “With facilities in northern Sweden and WA state, MGT Capital Investments, Inc. (OTCQB:MGTI) ranks as one of the largest U.S. based Bitcoin miners. Further, the Company continues to execute on an expansion model to grow its crypto assets materially. The Company also owns a portfolio of cyber security technologies, including the Company’s first product, Sentinel, an enterprise class network intrusion detector which was released in October 2017. The Company also owns the intellectual property associated with developing and marketing a mobile phone with extensive privacy and anti-hacking features. The cybersecurity products were guided by John McAfee, the Company’s former Chief Cybersecurity Visionary. MGT is presently evaluating various alternatives for its cybersecurity business.”

As noted above, the company is beginning to take on a rebuilding project after redefining itself as a pure Bitcoin mining play and then running headlong into a major and lasting Bitcoin price correction. The key move so far is the company’s choice of Robert S. Lowrey as Chief Financial Officer, Treasurer, and Secretary.

According to the release, “Mr. Lowrey brings to MGT a depth of knowledge in financial leadership, corporate governance, public company reporting and technical accounting. Prior to joining MGT, he served as a Director of Finance for Bioventus LLC, a privately held medical device company, and as Controller and Principal Accounting Officer for BioCryst Pharmaceutics, Inc., a NASDAQ listed company. Mr. Lowrey also held various financial roles of increasing reasonability at Dex One, formerly RH Donnelley, a NYSE listed marketing solutions company. As a CPA, he was employed by Ernst & Young, LLP for 11 years serving both public and private companies.”

H. Robert Holmes, Chairman of the Board of Directors of MGT commented, “We are fortunate to have someone with Rob’s qualifications and skillset as the Company transforms its operations into free cash generation, and as we remain committed to positioning the Company for its anticipated application for NASDAQ up-listing.”

We’ve witnessed -8% stripped out of the listing over just the past week alone. That said, MGTI has a track record that includes a number of dramatic bounces. In addition, the listing has benefitted from a jump in recent trading volume to the tune of 19% over the long run average.

Currently trading at a market capitalization of $113.3M, MGTI has virtually no cash on the books, which must be weighed relative to virtually no total current liabilities. MGTI is pulling in trailing 12-month revenues of $1.5M. In addition, the company is seeing major top-line growth, with y/y quarterly revenues growing at 871.7%. This is an exciting story, and we look forward to a follow-up chapter as events transpire. Sign-up for continuing coverage on shares of $MGTI stock, as well as other hot stock picks, get our free newsletter today and get our next breakout pick!