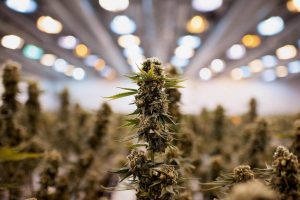 Aurora Cannabis Inc (OTCMKTS:ACBFF) has positioned itself for a potential break above the key 50-day simple moving average, which would re-establish shares of the leading Canadian cannabis play back in an upward trending status for technical traders. To potentially help fuel the action, the company just announced that it has been successful in its offer for all the issued and outstanding common shares for CanniMed Therapeutics Inc.

“Following the take up, we will immediately commence with the integration of CanniMed into the Aurora organization and start executing on realizing the strategic synergies we have identified,” said Terry Booth, CEO. “Combining two of the leading international cannabis brands creates a company that is exceptionally well positioned to capitalize on the tremendous opportunities in the domestic and international medical markets, as well as the Canadian adult consumer use market, once legalized. We look forward to working closely with our new colleagues to establish Aurora’s Medical Cannabis Centre of Excellence.”

Recent action has seen 5% during the past week in terms of shareholder gains in the name. Market participants may want to pay attention to this stock. ACBFF has a history of dramatic rallies. In addition, the name has witnessed a pop in interest, as transaction volume levels have recently pushed 12% above its longer-run average levels.

At this time, carrying a capital value in the market of $3.37B, ACBFF has a significant war chest ($350.8M) of cash on the books, which is balanced by virtually no total current liabilities. ACBFF is pulling in trailing 12-month revenues of $31.1M. In addition, the company is seeing major top-line growth, with y/y quarterly revenues growing at 201.2%. As more color becomes clear on the name, we will review the situation and update our take. Sign-up for continuing coverage on shares of $ACBFF stock, as well as other hot stock picks, get our free newsletter today and get our next breakout pick!