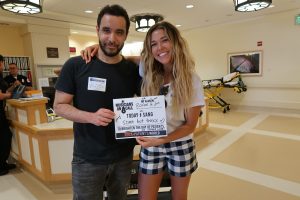 Creative Medical Technology Holdings Inc (OTCMKTS:CELZ) has exploded higher over the past couple days on a massive increase in trading volume. The move got started from deep sub-penny territory with a high-participation breakout above the stock’s 50-day simple moving average on Monday. And that momentum has carried through with an extension to new multi-month range highs in Tuesday’s action.

That movement has been driven by a couple of key catalysts. The company just announced that debt from four early round lenders totaling $255,000.00 of principal has been extinguished. This follows the company’s announcement on Monday that it will be exhibiting its patented CaverStemTM stem cell procedure for erectile dysfunction at the annual American Urological Association (AUA) conference on May 18-21, 2018 in San Francisco.

Creative Medical Technology Holdings Inc (OTCMKTS: CELZ) bills itself as a company that is engaged in stem cell research and applications for use to treat male and female sexual dysfunction, infertility and related issues. It holds a patent for its erectile dysfunction (“ED”) treatment and was granted a license by Los Angeles Biomedical Research Institute at Harbor-UCLA Medical Center, a non-profit biomedical research and education institute (“LABIOMED”), for the infertility treatment.

It has also filed a patent application focused on physical manifestations of female sexual arousal disorder, as an extension of the work with stem cell therapies for ED. Following testing of its ED treatment, Creative Medical intends to market treatment kits to physicians for use with their patients suffering from ED. During first quarter 2016, it commenced a 15-month clinical trial study being conducted at UCLA by LABIOMED on the efficacy and safety of the ED treatment.

According to company materials, “Creative Medical Technology Holdings, Inc. is a clinical stage biotechnology company currently trading on the OTCQB under the ticker symbol CELZ.”

Find out when $CELZ stock reaches critical levels. Subscribe to OracleDispatch.com Right Now by entering your Email in the box below.

As noted above, the stock has been on a tear in recent days. And part of that has been pushed along by the company’s willingness to clean up its longer-term balance sheet. However, this action is likely far more about the company’s announcement that it is moving toward a public presentation of its findings as it goes after the erectile dysfunction market.

“Our cutting edge technology in autologous stem cell treatment for erectile dysfunction is anticipated to be received by the urologic community with great enthusiasm as our CaverStem TM procedure represents an all-natural alternative for those patients resistant to the use of PDE5 inhibitors such as Viagra and Cialis,” said Thomas Ichim PhD, Founder and Chief Scientific Officer of Creative Medical Technology Holdings, Inc.

Traders will note more than 310% tacked on to share pricing for the name in the past week, but this action is running counter to the larger trend in the name. That said, CELZ has evidenced sudden upward volatility on many prior occasions. What’s more, the name has registered increased average transaction volume recently, with the past month seeing exceeding 880% over what the stock has registered over the longer term.

“Since beginning commercialization of our patented and tested CaverStemTM procedure in November 2017, we have received positive responses from the urology community in the limited cities marketed. We anticipate the introduction of our technology to the attendees of the largest annual urology conference, to promote nationwide interest in CaverStemTM,” said Timothy Warbington, CEO of Creative Medical Technology Holdings, Inc.

At this time, carrying a capital value in the market of $1.7M, CELZ has virtually no cash on the books, which must be weighed relative to about $381K in total current liabilities. One should also note that debt has been growing over recent quarters. The company is pre-revenue at this point. We will update the story again soon as further details emerge. Sign-up for continuing coverage on shares of $CELZ stock, as well as other hot stock picks, get our free newsletter today and get our next breakout pick!

Disclosure: we hold no position in $CELZ, either long or short, and we have not been compensated for this article.