Aphria Inc (OTCMKTS:APHQF) Claws Out a Potential Key Bottom as Expansion Ramps Up 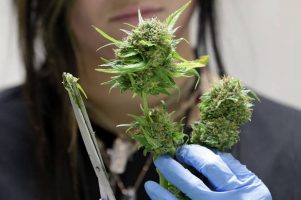 Is the Rough Ride Over for Tenaris S.A. (TS)

Tenaris S.A. (TS) shares are trading at lower $16.22 and the avg recommendation for the stock is Moderate Buy, while the current analyst price...
Read more
Sector News

Liberty Global plc (LBTYA) shares are trading at lower $22.77 and the avg recommendation for the stock is Moderate Buy, while the current analyst...
Read more
Sector News

Orchid Island Capital Inc. (ORC) shares are trading at higher $5.64 and the avg recommendation for the stock is Strong Buy, while the current...
Read more
Sector News

When Will Auris Medical Holding Ltd. (EARS) Slow Down

Auris Medical Holding Ltd. (EARS) shares are trading at higher $1.15. To add more color to this target, the company’s high over the last...
Read more

Aphria Inc (OTCMKTS:APHQF) shares just tested the 200-day simple moving average in concert with key support at the $7.50 per share level. So far, we’re seeing a supported bid come in around this area on increasing volume. As we’ve noted recently, valuation concerns are currently dominating the narrative for the stock, which has pulled back aggressively from its early January highs near the $20 per share level.

Helping to spark renewed interest, the company just provided an interesting operational update to its Part III expansion of its facility in Leamington, Ontario, which received Health Canada approval as previously announced on March 13, 2018. We’ll cover the details below. But first, let’s take a closer look at this company from a bird’s eye view.

As noted above, the stock is attempting to rebound off support following an aggressive correction that has been largely driven by concerns about valuation among larger Canadian cannabis plays.

The company’s operational update to its Part III expansion of its Ontario facility included some important details: the Part III expansion is now at full capacity with its weekly crop harvests of 10,000 plants; the first harvest from Part III is expected to take place during the last week of April; Part III is anticipated to yield 380-400 kg per week, which is in addition to the yields from our existing 100,000 square feet of production area; and once in full rotation, the Leamington facility will house production from over 80,000 plants resulting in a total annual yield of 30,000 kg.

“We’re incredibly excited and proud of our whole team that has ramped up operations in our state-of-the-art Part III greenhouse expansion with incredible speed and care,” said Vic Neufeld, CEO of Aphria. “As we prepare to make our first harvest from Part III later this month, work continues to rapidly advance on our 700,000-square-foot Part IV expansion, which we anticipate will have its first sale early next year. At Aphria, we know how to grow, and we know how to grow to scale, which is why we will continue to set the standard around the world for low-cost production of high-quality, pure and safe cannabis for both the medical and adult-use markets.”

Earning a current market cap value of $1.25B, APHQF has a significant war chest ($116.1M) of cash on the books, which is balanced by about $1.6M in total current liabilities. APHQF is pulling in trailing 12-month revenues of $25.5M. In addition, the company is seeing major top-line growth, with y/y quarterly revenues growing at 62.7%. This may be a very interesting story and we will look forward to updating it again soon. Sign-up for continuing coverage on shares of $APHQF stock, as well as other hot stock picks, get our free newsletter today and get our next breakout pick!