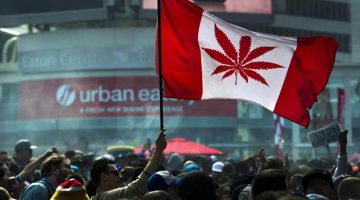 We have been suggesting continued strength for shares of Aurora Cannabis Inc (OTCMKTS:ACBFF) since it retook key support at the $5/share level a couple weeks ago. Since that time, the stock has blitzed up to retake both its major moving averages, and now sits poised to potentially test resistance above around $8/share.

The company is also moving to support its cause, starting this week by reaffirming its commitment to advocating for the amnesty of cannabis possession offenses through a $50,000 contribution to the Campaign for Cannabis Amnesty. According to the release, “The organization will use the funds to advocate for the expungement of criminal records for personal possession cannabis offenses that will no longer be illegal after October 17, 2018, and to educate Canadians about the injustices that currently exist as a result of the prohibition of cannabis.”

As noted above, ACBFF shares have been soaring, up 37% in the past month on a 210% jump in average volume. That is partly due to strength in the space, partly due to the company’s production footprint, and partly due to its brand as a cannabis stock in a leadership position.

This last point is impacting by many factors, not least of which is its willingness as a corporation to address the key causes that surround its narrative.

“Aurora strongly believes that the negative socio-economic impact of maintaining criminal records for simple possession needs to be addressed urgently,” said Jonathan Zaid, Aurora’s Director of Advocacy and Corporate Social Responsibility. “We look to the Canadian government to provide amnesty to these people, largely from marginalized communities, ensuring their broad exclusion from Canadian society is lifted. The work of the Campaign for Cannabis Amnesty is making a very positive contribution towards this much-needed policy change. Even through there is still a lot of work to be done to encourage justice reform in this area, Aurora is proud to support organizations like Campaign for Cannabis Amnesty that are leading the way forward.”

Currently trading at a market capitalization of $3.7B, ACBFF has a significant war chest ($231M) of cash on the books, which must be weighed relative to about $2.6M in total current liabilities. One should also note that debt has been growing over recent quarters. ACBFF is pulling in trailing 12-month revenues of $42M. In addition, the company is seeing major top-line growth, with y/y quarterly revenues growing at 211.1%. You can bet we will update this one again as new information comes into view. Sign-up for continuing coverage on shares of $ACBFF stock, as well as other hot stock picks, get our free newsletter today and get our next breakout pick!