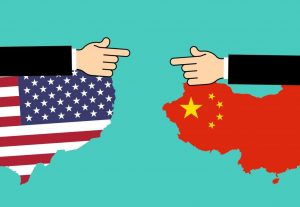 In a poll conducted by the law firm Baker McKenzie, 93% of Chinese companies were considering making some change to their supply chains to mitigate the effects of trade tariffs, ranging from a complete supply chain and production transformation (18%), to making major changes (58%),  with an additional 17% of companies polled making small changes in response to the trade war.  Only 7% reported making no changes at all.

Economists note warily that a trade war seldom yields winners and both sides will experience a diminution in growth if a deal is not reached soon.

On January 7, 2019, trade talks between the two global powers reconvened in Beijing, marking the first face-to-face negotiations since agreeing to a 90-day truce a month earlier, during the G20 Summit in Buenos Aires.  China’s top economic adviser Liu He participated at the talks, which were originally intended to be vice-ministerial level only.  The discussions between the U.S. and Chinese negotiators were primarily divided into two broad areas, “trade” issues, to address trade imbalances in certain economic sectors and “structural” issues, including forced technology transfers, protection of intellectual property rights and non-tariff barriers.

On-again, off-again trade talks continued in January, and in-person talks in Washington DC, January 30-31, 2019 yielded some positive results as China agreed to buy 5 million tons of soybeans and President Trump agreed to meet with Xi Jinping in February.  On February 11-15, 2019, trade talks were held in Beijing and subsequent talks in Washington, were productive with Liu He and Trump touting continued progress towards a deal.  A month passed until there was new face to face discussions between Chinese and American negotiators, but March 28-29, 2019, trade talks resumed in Beijing.  Following the talks, China extended the suspension of additional tariffs on United States autos and auto parts, which were supposed to go back into force on April 1 and agreed to ban all variations of Fentanyl, a highly addictive opioid that had been a priority for US negotiators.

The United States and Chinese negotiators continued discussions in Washington DC from April 3 to April 5 and trade deal enforcement offices were agreed to be established to help monitor compliance with any deal.  During negotiations on April 30 and May 1 in Beijing, no deal was agreed and relations between the two sides seemed to deteriorate in the following couple of weeks.

Since China is an export-driven economy, conventional wisdom suggests that China will be hit harder by a protracted trade war, but today’s China is not the same adversary as in earlier international trade disputes.  Made in China 2025 (MIC 2025), a ten-year, comprehensive blueprint aimed at transforming China into an advanced manufacturing leader, outlines the country’s strategic plan for dominance in technology.

New York Times journalist Thomas Friedman recently quoted internet and technology analyst Mary Seeker in an op-ed as observing, “Five years ago, China had only two of the world’s largest publicly traded tech companies, while the US had none. Today, China has nine of the top 20 and the US has 11. Twenty years ago, China had none.”  China is now an innovation economy, and export of good and products are rivaled now by blockchain, AI, and IoT technology that rival any other nation’s output in the world.

At the World Economic Forum, the idea was postulated that the world is on the brink of a Fourth Industrial Revolution, as suggested by the work of Professor Klaus Schwab, Founder and Executive Chairman of the World Economic Forum. His book, ‘The Fourth Industrial Revolution’ details how he believes that “…we are at the beginning of a revolution that is fundamentally changing the way we live, work and relate to one another.”

China is taking this Fourth Revolution seriously and despite a trade imbalance and economic challenges, recognizes that technology is the way forward.

Xi Jinping, president of China, spoke in May 2018 about harnessing the power of technology. “A new generation of technology represented by artificial intelligence, quantum information, mobile communications, internet of things, and blockchain is accelerating breakthrough applications,” Xi said.

JD.com, Alibaba, Tencent and Baidu are making extraordinary gains in AI.  Last year, the Chinese science ministry heralded the news that the country’s open AI platforms will rely heavily on Baidu for autonomous driving, Tencent for AI in healthcare, and Alibaba for smart cities –Chinese companies furthering the future of China.

When you talk to Dr. Steve Deng, the Chief AI Scientist for Matrix AI Network, you realize that the company, like many other early stage companies and start-ups is aiming even higher, “Permissioned blockchains have already achieved substantial enterprise adoption with industry shaping changes in supply chain, finance, insurance, international settlements, and more.  Aside from Matrix AI Network’s unique AI capabilities, one of our goals is to build a complete hybrid public/private distributed computing ecosystem with high enough security and performance to integrate with enterprise systems.  Likewise, we see data privacy currently undergoing a major transformation within governments, and individuals calling for more transparent and secure data management solutions.  In order for data to achieve an impactful scale capable of training more powerful AI models, it’s critical that we enable data to flow securely between public and closed systems, which forms part of our impetus for partnering with leading hospitals in China to improve in these areas.”

As the world watches for the news of a lasting bilateral trade agreement between the United States and China, it is important to remember that China is not sitting idly by and waiting for a breakthrough, and its entrepreneurial class is certainly not either.

Not so long ago, China’s greatest impact on the global economy was via the manufacturing floor, with its large and affordable labor force producing the products everyone wants at a price no one else could match, today it is clear that science and technology is where China sees its promising future, and no tariff dispute can stop that inexorable progress.

Sign-up for continuing coverage on this hot topic, as well as other hot stock picks, get our free newsletter today and get our next breakout pick!