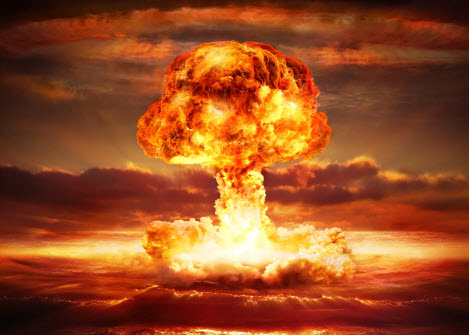 Aside from the COVID-19 outbreak that is likely to mark the entire 2020 decade, the year of 2020 has also witnessed the fastest 30% sell-off ever recorded, and therefore surpassing the pace of stock market crashes recorded earlier.

The second and third quickest pullbacks took place in 1934 and 1931, respectively. Aside from its pace, where does the 2020 stock market crash rank in the history of financial markets corrections? Here, we remember the 5 largest stock market crashes of all time.

The year of 1929 hosts the first large U.S. stock market crash recorded. Prior to this year, the U.S. economy was doing really well with commodities like homes and cars being very popular products. The new wave of post-war confidence ran out of steam near the end of the decade to pave the way for the stock market crash in October 1929.

Already next year, the United States was in the Great Depression, yielding a 15% contraction in the world’s GDP by 1932.

Nearly 60 years after the 1929 stock market crash, “Black Monday the 2nd” took place. Aside from over-leveraged investors, the 1987 stock market crash was also boosted by wrong application of the latest trading technology. 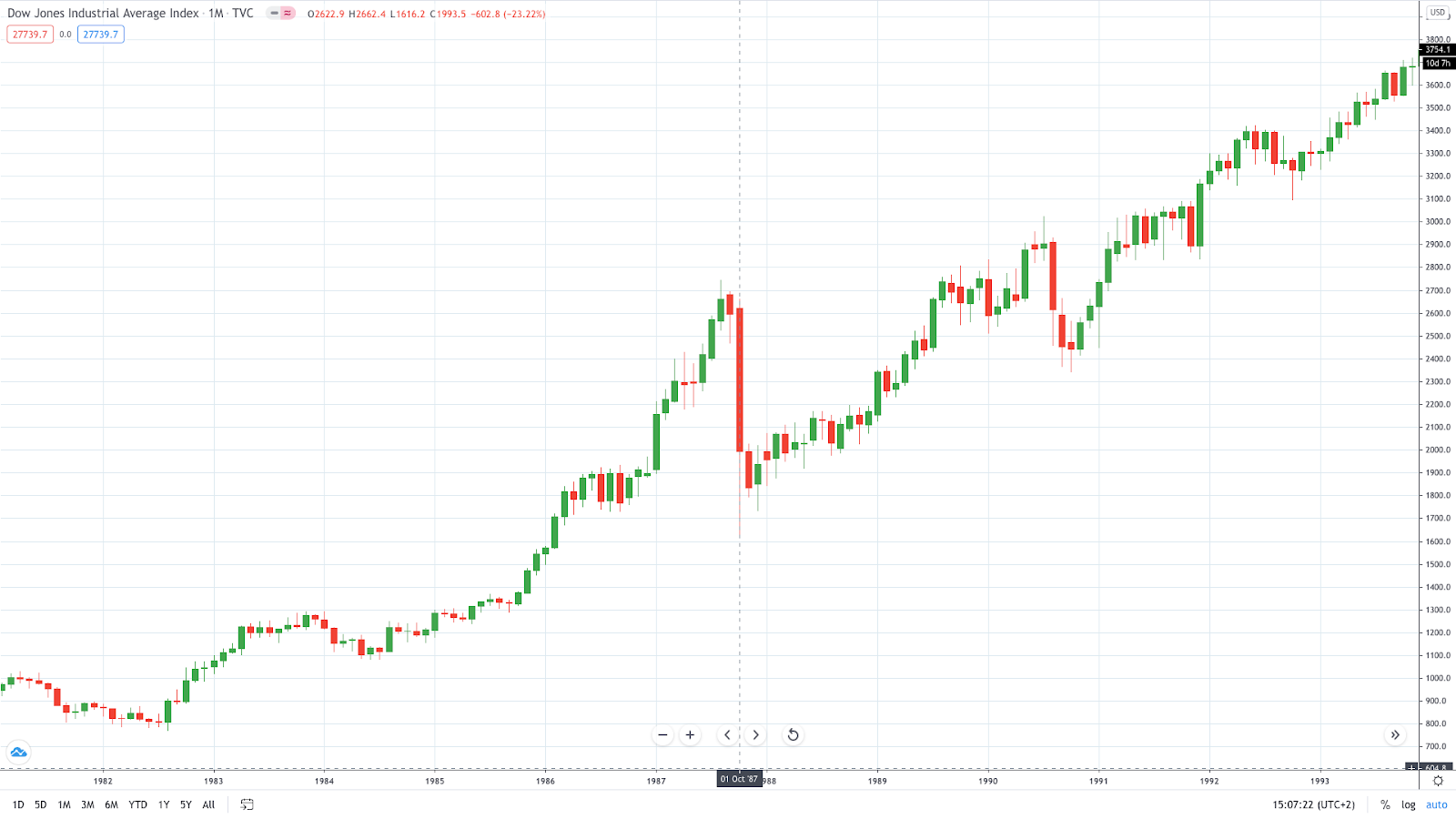 Ultimately, a combination of algorithmic trading models gone berserk, a crash in oil prices, and the rising U.S. – Iran tensions marked one of the worst days in the stock market history. Again, the questionable leverage practices created a bubble which ultimately popped. On October 19th, the Dow Jones tumbled an astonishing 22.6% in a single day.

Similar to 1987 when the computer-based trading models contributed to the market crash, the technology was again front and center of a new round of panic selling 12 years later. During the second part of the 1990s, investors had started with the aggressive buying of tech stocks, such as Aol.com, Cisco, Intel, etc.

However, the bullish sentiment obviously went to extreme levels causing the market to correct sharply between 1999 and 2002 in what is known as the “Dot.com” or “Internet” stock market crash. Ultimately, over $7 trillion in market value were wiped off during the dot.com market crash.

One of the most striking facts from this market crash is that the tech-focused Nasdaq plunged from 5,000 in early 2001 to almost 1,000 by 2002. It then took 13 years for it to come back to levels recorded during the dot.com peak.

In 2008, the world witnessed a global financial crisis (GFC) that yielded another stock market crash, less than six years since the last major correction ended. Again, one of the key factors contributing to a stock market crash were Wall Street banks’ high-risk trading practices.

This economic crisis was somewhat similar to the Great Depression crisis in 1929, as it came after the market for mortgage-backed securities popped. These financial products were aggressively sold to private and institutional investors before plunging in value as housing prices decreased. 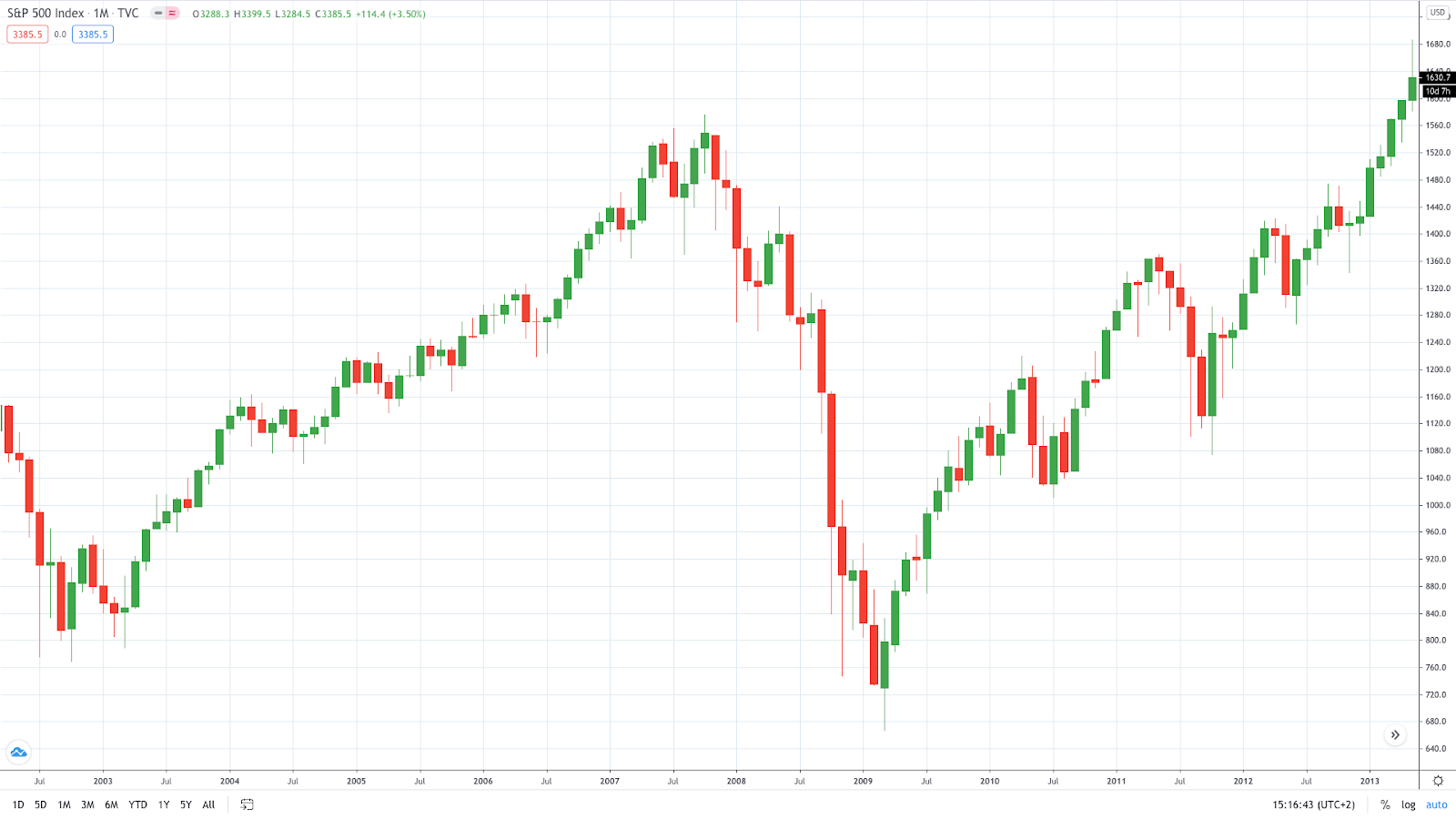 The crisis gained another dimension when one of the largest banks in the U.S. – Lehman Brothers – collapsed. This prompted the U.S. Congress to approve a massive government funding plan and, therefore, paving the way for a bailout of “too big to fall” banks. Ultimately, the S&P 500 index fell from 1440 in May 2008 to below 700 in March 2009.

The outbreak of the novel COVID virus in China in early 2020 facilitated the fastest 30% sell-off ever recorded. The new record was set after the U.S. benchmark index S&P 500 needed only 22 trading days to tumble 30% from its record high set in February this year.

Unlike on previous occasions, the U.S. stock market performed a V-shaped correction to erase all earlier losses and print a fresh all-time high just five months later. The recovery in equities was initiated by a $2 trillion stimulus package approval by Congress, the largest of its kind in U.S. history.

At least five major stock market crashes were witnessed in the past 100 years. The excessive use of leverage, high-risk trading approaches combined with geopolitical tensions and health crises created waves of panic selling. Following another such crisis in 2020, we can safely say that, as long as financial markets stick around, there will be market crashes as well.